Below is an eyewitness report of a terrible hit and run accident that happened in Ogbese, a village very close to Akure in Ondo State Nigeria yesterday.

This is rather disheartening to see that people could be so heartless to the extent that a trailer driver would hit a Passerby, drive on the Corpse , and run away! ! ! This is the situation at Ogbese, located close to Akure, Ondo state.

Am a passenger en route Akure to Port Harcourt and I have been stranded in this traffic for 5hrs due to the above scenario.

Unfortunately the Residents of the Community have taken laws into their hands as they have stated burning tires and destroying other trailers.

Due to their agitations, they are tilling the tarred road in a bit to construct bumps as they feel its the solution to the unending accident on the major road.

Although lots of effort have been put in place such as Police officers, FRSC, JTF, ARMY, the King and Chiefs of the community and unbelievably, the Chief of Staff of Ondo State but all to no avail.

Please we need Federal Government’s urgent solution to his menace.

See more photos from the accident scene below 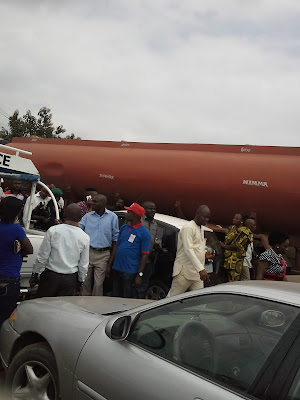 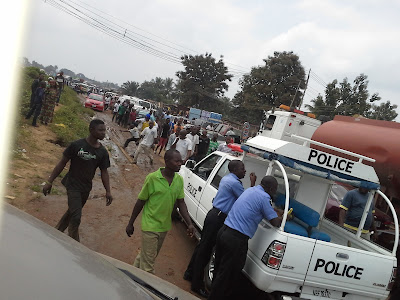