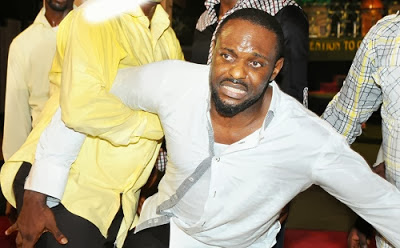 As earlier reported, the Nollywood bad boy was a guest at TB Joshua’s SCOAN church on Sunday and a deliverance prayer for held for him.

According to the video, the actor who was possessed by an evil spirit struggled as they prayed for him.

During the deliverance session, an evil spirit spoke through Jim Iyke that he’s the one behind his stubbornness and that he prevented the actor from getting married all these years.

Check out a confirmation message of Jim Iyke‘s deliverance from Prophet TB Joshua below;

As Wise Man Daniel ministered prayer in Jesus’ name, Nollywood Actor Jim Iyke, of international fame, was arrested by the power of the Holy Spirit. The evil spirit that had tormented his life for so many years began to manifest, confessing that it was the cause of his setback and disappointment. It confessed that he was the biggest and that it was only God’s grace that had kept him. He was delivered in the name of Jesus Christ and immediately knelt in God’s presence, appreciating His Creator for his miraculous deliverance.

Like previous cases of exorcism being carried out at Prophet TB Joshua’s church, critics didn’t leave any stone unturned in Jim Iyke’s case.

They claim the actor played his usual movie role to impress followers of the controversial prophet.

Few hours after the deliverance, Jim Iyke took to his Twitter page to say;

“Its Beautiful that’s d least I can say. Nothing else truly matters. Absolutely nothing! God liveth whether you’re a believer or not.”

Veteran Nollywood actress Camilla Mberekpe who confessed of being a witch at TB Joshua’s church in April accused him of hypnotizing her.