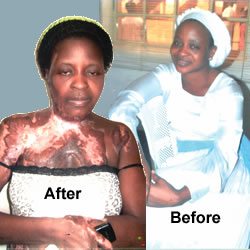 The 30-year-old woman who now wears a frightening look fell into a trance for 7 days in July, 2012 and warned her church members not to celebrate the spiritual feat for her.

Contrary to her request of not celebrating her feat, the excited church members who insisted on celebrating her prepared food and dragged her to the church where they danced round her to celebrate her spiritual achievement.

During the celebration, a church worker identified as Elijah allegedly sprayed perfume known in celestial parlance as Ona La on the dancers without taking cognizance of lighted candles which some of them were holding.

Alas the perfume caught fire and Sade was set ablaze along with three other members who had joined in the celebration. A pastor in the church who had come to rescue them was also affected by the fire.

However, Sade was the worst-hit as she suffered severe burns. So the once delectable Sade has been turned to a monster of sort.

Prophetess Folashade Esther while speaking at her residence, No 77 Osopitan bus-stop, Agbado recently, the Abeokuta-born single lady said she was still at a loss as to why such a terrible fate befell her even as she blamed her church members for her predicament.

“I had warned them not to celebrate the trance for me; that I didn’t want noise. Rather, I asked them to pray for me silently, but they refused. This was not the first time I would be going into a trance; the ill-fated one happened to be my fourth. Aside this, I warned Elijah not to pour perfume on me, but he didn’t listen, see what has happened now,” she lamented.

According to her, the fire incident might also be a spiritual attack from the enemies of somebody she prayed for while in the spirit. “Maybe, I prayed for somebody when I was in the spirit and the thing now bounced back on me during the celebration,” she added.

Immediately after the incident, Sade and other victims of the fire were rushed to a private hospital near the church from where they were taken to the General Hospital, Orile-Agege the following day for a better medical attention from where they were later discharged. However, while others have made considerable progress and have since returned to the church, Sade could not because of the severity of her condition.

Although she commended the shephered in charge of the church, Prophet Oladele Ogundipe and other members of the church for taking very good care of her since the incident occurred, she sought the support of other well-meaning Nigerians to restore her to her former position.

“My church has been so wonderful to me. The shepherd, his mum, the church patron and other members of the church have promised to help me. But I don’t know what will happen tomorrow. Nobody will be ready to marry me in my present condition. I’m not even comfortable with myself. This is why I am appealing to members of the public to join my church in assisting me to get over my present condition,” she added.

She is to blame for her predicament- Shepherd- In- Charge.

Meanwhile, the Shepherd-In- Charge of the church, Prophet Ogundipe absolved himself of any blame in the incident, claiming Sade should be held responsible for her present predicament. According to him, she and other members of the church who joined in the celebration went against the rules and regulation of the church. “In the Celestial church, there is nothing like trance or going to the mountains for seven days. In our church, we don’t do any trance celebration, we don’t go to streams or the bush; we are not fetish and we don’t do anything barbaric. I have always warned all church members to steer clear of anything that is not in the vision of the church,” he added.

Though he said he and the chairman of the church were not around on the fateful day, he gave an account of what must have caused the fire: “People have been saying it was a strange fire but there is nothing like that. It was the perfume that was poured on her that caught fire because of the lighted candle at the altar. This is a lesson to everybody that if they want to employ anybody, they should not employ an illiterate because they would not know how to handle things.”

He told Saturday Tribune that the church member(Elijah) that allegedly sprayed the perfume had been sacked and disgraced from the church. On the steps the church had taken since the incident, Ogundipe explained: “Immediately the incident happened, they took them to a private hospital nearby. But I insisted they should be transferred to a government hospital for the purpose of transparency because we have nothing to hide. We also reported the incident to the police because I know bad news spreads wide.”

He added: “So far, the church has spent over N800,000 on Sade and the three others that were affected by the incident. We employed somebody to take care of Sade at home. The church gives her N5,000 weekly. We bought a fan and a generator for her and we rent air-conditioned vehicles to take her to the hospital whenever she has an appointment. We had to stop the on-going construction work at the church because of these expenses.”

He however condemned Sade’s general attitude to her situation: “She asked to be discharged from the General Hospital, Orile-Agege when she was still receiving treatment. Even the medical personnel are not happy with her attitude.”

When Saturday Tribune suggested the idea of reconstructive surgery to Prophet Ogundipe, he said he was not sure the church would be able to foot the bill for now even as he added that there had been assurance from experts that the wounds would heal naturally.

“A physiotherapist at the Lagos State University Teaching Hospital(LASUTH) has said that it will take between two to three years for the wounds to heal completely because the trauma is still there. They are still applying some drugs for now and may not need any reconstructive surgery.” (Tribunereport)