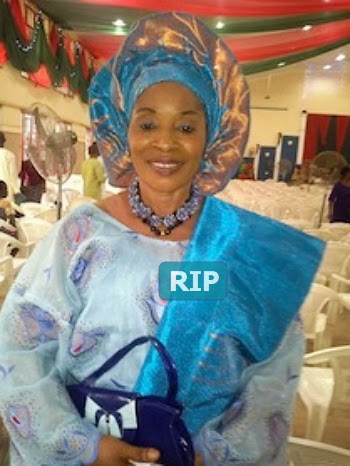 The wife of the Ogun State All Progressive Congress (APC) state chairman, Alhaji Roqeeb Adeniji lost his wife yesterday in an auto crash at Akihale area, Wasinmi in Ewekoro local government council of the State.

Our correspondent gathered that the woman, Deaconess Rachael Kikelomo Adeniji, 58, was involved in the accident when returning from the tour of the local government to Ifo area yesterday.

The vehicle, a Toyota car, PM News learnt lost control and somersaulted several times. She reportedly died on the spot of the accident.

One of the deceased’s son, Bolaji Adeniji confirmed the death of his mother to journalists, saying that,” God knows best. She has only gone to where she came from, adding that, it was a big loss to the family.

Alhaji Adeniji, popularly called Baba Computer by his political admirers is the APC state Chairman in Ogun and he is from Ado Odo/ Ota local government area.

Late Adeniji has part of the entourage that have been following the governor since the commencement of the local government tour three weeks ago.

Her husband, who is the party number one in the state was among those that gave the goodwill messages yesterday at the Ifo local government council.

The deceased, according to findings was among those listed to address the people today at the governor’s assessment tour of Ado Odo/Ota area.

It was earlier speculated in the morning that the governor may shift the tour but our correspondent can reliably report that the governor with his large convoy left the Oke Mosan secretariat in Abeokuta for Ota at exactly 11:40am today.

The remains of the deceased according to a family source will be buried in two weeks time and the corpse is at the morgue in the state hospital, Ijaiye in Abeokuta.

She is survived by her husband and four children.