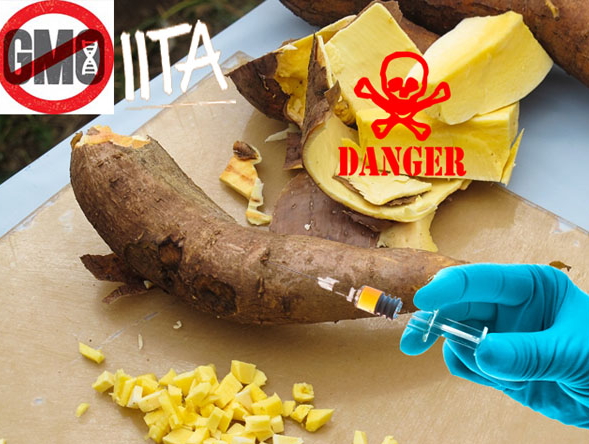 Once again, stakeholders appear to have brought to the fore, critical issues and concerns over genetically modified organisms (GMOs) and the Nigerian Biosafety Management Act 2015.

On February 13, 2017, there was a news report in Daily Trust that the National Inter-Religious Council (NIREC) cautioned the Nigerian government with regard to permitting GMO foods into Nigeria. NIREC in a report by its committee to investigate claims for and against GM foods said it was not advisable to go on with GMOs in Nigeria for now because the country was not ripe for it. The report entitled, “Final report on GMOs and Recommendation,” said the agency in charge of biotechnology industry in the country does not have facilities and expertise to regulate and control GM practice in the country.

Also, on Wednesday, February 22 2017, at a daylong gathering in Benin City, Edo State, participants brainstormed on what they perceive as “the increased aggressive push of the biotechnology companies in partnership with their local actors in Nigeria to ensure favourable legislations as a step towards unleashing their products and commodities on Nigerians” The activists want the Nigerian Biosafety Management Act 2015 reviewed and GMO permits issued withdrawn. At the conclusion of deliberations, participants came up with the “Benin City Declaration” wherein they lamented that the Nigerian government, in passing the Nigerian Biosafety Act 2015 into law, did not take into account the concerns of local farmers and critical stakeholders, contrary to the provisions of the African Union’s Model Law on Biosafety and the Cartagena Protocol. They insisted that the Act, in its current form, lacks the legal safeguards to protect Nigerians’ food culture, environment, ecosystems and human health.

Equally contained in the declaration is that the production of GMOs is a threat to our biosafety; poses great threat to human and environment health and severely impedes the attainment of sustainable agriculture, food sovereignty/security. Thus they submitted, “We do not need to endanger our environment and crop varieties on the altar of GMOs. We do not want GM cassava or GM rice purported to be fortified with Vitamins, we can get high amounts of Vitamin A from just eating carrots”.

“Contrary to the arguments peddled by modern biotechnology industry, there are few or no tangible success stories on GMOs and Nigeria must not be used as ground for experiments for unverified technologies. Genetically engineered crops are being resisted and rejected in many countries in Europe as well as Africa and it is not correct to paint a picture of major strides being made by the proponents.” they stated.

‘’No matter what the current GMO promoters say, believe or defend, the fact remains that a defective piece of legislation ultimately will be reviewed or jettisoned. The same will be the terminal point of a technology whose obsolescence is already appearing’’ was another criticism.

The debate around genetically modified products continues and is often characterized by emotive and misleading information about purported dangers that are not supported by any scientific evidence. This haughty attitude against biotechnology that is expressed is based on willful ignorance of food supply threats that the majority of the world’s agrarian population actually faces every day. Global human population is projected to rise up to 9.6 billion by 2050 while climate change raises additional problems for agriculture in terms of water and temperature stress, increased disasters and extreme weather conditions. What these portend are unique food security challenges as we have in the Southern part of Africa today and countries around the horn of Africa that are being ravaged by drought were cows and farms have perished. 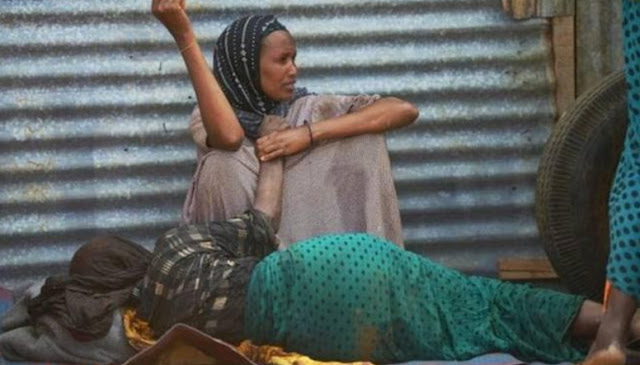 An elderly woman weakened by hunger lies on the ground as her daughter watches over her at a camp for the internally displaced on the outskirts of Baidoa town, the capital of Bay region of south-western Somalia

Though some progress has been made in meeting the Millennium Development Goals (MDGs) on extreme poverty, malnutrition, infant mortality and food security, much work remains to be done to ensure that citizens of all countries enjoy the full opportunity of healthy and sustainable access to food in any extreme condition such as; flood, disaster or plague due to climatic change.

Biotechnology and genetic engineering, while not being the only solution to these challenges, offer great potential in addressing many specific concerns in food production, including micro-nutrient deficiencies, productivity and yield gaps, pest and disease problems. There exists an international scientific consensus that the “genetic modification” process itself does not raise any risks over conventional breeding approaches but rather offers a quicker and more precise approach. Biotechnology has been used for more than two decades without a single, documented safety concern. Nigeria cannot afford to be left out in the global agricultural biotechnology revolution, Professor Lucy Ogbadu, Director General/CEO, National Biotechnology Development Agency insisted in her recent article.

Many Nigerian scientists in the field of Biosciences at this particular time in our history are delighted that their nation is among the comity of nations on course in appreciation and application of Biotechnology research with all its potentials to improve the quality of life and create job opportunities for her people. Immense benefits derivable from this technology are globally acknowledged and they are as varied as the vast scope of the technology itself. Global interests of the impact of Biotechnology centre mainly on Food security, Health benefits as well as Environmental preservation among others.

Consequently, Nigeria as a developing nation confronted with challenges of food insecurity, poverty and inadequate health care was quick to embrace Biotechnology by producing a well-developed, robust and all-inclusive Biotechnology Policy. Besides, Nigerian biotechnologists are well trained and strategically positioned for practice and regulatory function towards transforming agriculture from subsistence to commercial level, Prof. Ogbadu emphasized. By having a Biosafety law in place, Nigeria has commenced a silent revolution she noted.

On Wednesday, March 16, 2017, the European Union regulatory agency considered the “last word” on whether glyphosate, the key ingredient in the world’s most popular weed killer, causes cancer has reviewed the research and concluded the herbicide is not carcinogenic. The agency said “the available scientific evidence did not meet the criteria to classify glyphosate as a carcinogen, as a mutagen or as toxic for reproduction”.

“This conclusion was based both on the human evidence and the weight of the evidence of all the animal studies reviewed,” Tim Bowmer, the chairman of the European Chemicals Agency’s Committee for Risk Assessment. 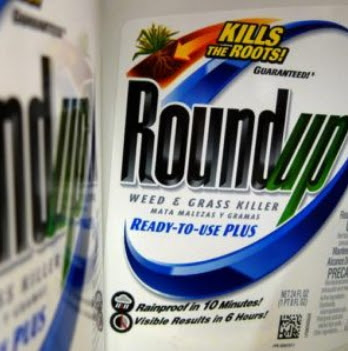 Glyphosate, the world’s most heavily used weed killers which the International Agency for Research and Cancer (IARC) has classified as probable cause of cancer. Glyphosate has been the subject of a relicensing battle which split governments, regulators and scientists, with one arm of the World Health Organization saying the herbicide could post a cancer risk to workers, while other WHO groups, including WHO itself, and multiple agencies around the world, concluding it poses no harm to workers or to our food supply.

The European Chemical Agency (ECHA) has gone to great lengths to sweep all evidence that glyphosate can cause cancer under the carpet. The data vastly exceeds what’s legally necessary for the EU to ban glyphosate and ECHA’s assessment could pave way for a new 15-year EU license for the weed killer.

The significant benefits of Biotechnology under effective Biosafety should not be ignored especially now that Nigeria is listed among the threatened nations of Africa. These threats prominently include insect attack ranging from mycotoxin contamination, both in the field and in postharvest storage to Fall Army Worm corn-field evasion.

Mycotoxins/Aflatoxins are trace compounds produced by certain fungi (Aspergillus), and represent a legitimate food safety risk. These fungi grow on corn, peanuts and other crops, especially in warm, humid areas that lack fungal control measures. They have been connected to numerous human diseases, primarily liver cancer when consumed, but also cause problems in livestock fed on contaminated grain. 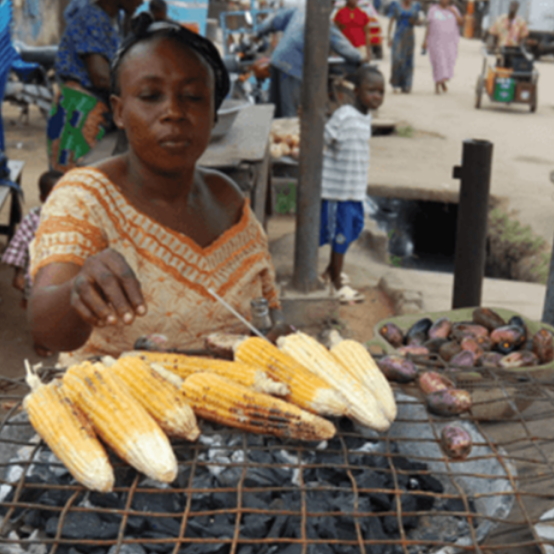 The plants can get infected in the field, and the fungi can multiply if storage conditions are not quite right. However mycotoxins are very bad news in Africa, and it’s a difficult problem to solve. Mycotoxin-producing fungus is worse in foods that have a lot of insect damage: the fungus enters the grain through the bites insects take. 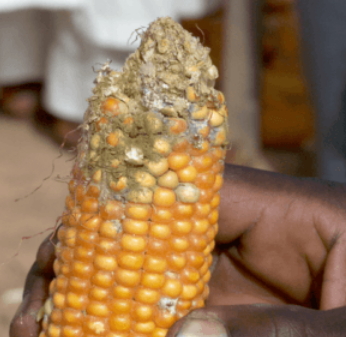 It’s a silent killer lurking in common foods. Up to a quarter of all liver cancer cases worldwide could be due to aflatoxin exposure. It is a carcinogenic toxin made by mold and kills thousands around the world and forces millions of tonnes of infected crops to be discarded each year.

Most certainly, technologies such as Bt toxin expression are highly effective in reducing initial attack by some types of insects, thus preventing fungal infestation and toxin secretion. The maize was engineered to express the gene-silencing RNA molecules by Monica Schmidt at the University of Arizona and colleagues.

This GM corn can police the Aspergillus fungus on its own cobs and stops it from producing poisonous aflatoxin that causes liver disease and cancer. Thus, GM corn blocks carcinogenic aflatoxins, and could eliminate ‘chronic health concern’ in developing world. Unfortunately, human and livestock health protective benefits such as this are all too often overlooked or ignored in the discourse over GMOs.

This is a typical way GMOs live up to the promises of the biotech industry? It is therefore no claim that “Biotech is helping to feed the world by producing foods free of toxins such as mycotoxin.”

Also in the case of Fall Army Warm, several pathogens although have been shown experimentally to reduce the abundance of fall armyworm larvae in corn, only Bacillus thuringiensis presently is feasible, and success depends on having the product on the foliage when the larvae first appear. Natural strains of Bacillus thuringiensis tend not to be very potent, and genetically modified strains improve performance (All et al. 1996).

The army worm burrows into cobs Recall that fall army worm has been wreaking havoc with corn-fields in the southern part of Africa and was officially reported in Nigeria in 2016. Fall army worm scientifically referred to as spodoptera frugiperda unlike the African specie; s.exemta (Okalombo/kommandoworm) is a highly polyphagous migratory lepidopteran specie that feeds on large numbers of leaves stems and cobs of crops. It poses a major threat to food security and agricultural trade as it is capable of wiping out the entire corn field as recorded in Zambia. Inonge Wina, Zambian Vice President lamented “they have come with such a force of mass destruction that has to be faced head on”. 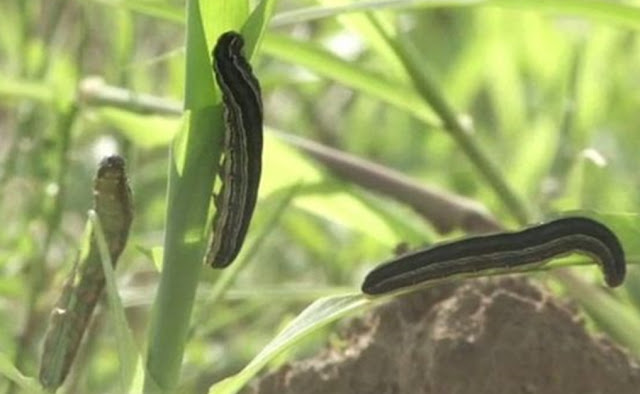 Incidentally, they are quite difficult to control as populations have developed resistance to pesticides. It is quite obvious that urgent actions for the application of genetic transformation indeed are needed to help Nigerian farmers’ strategy to control the pest and for crop improvement in the semi-arid tropics. Biotechnology here again is inevitable.

Convincingly, these significant biotechnological developments have voided the unscientific monographs and skepticism against the application of biotechnology and consolidate the fact that science is not ideology. The existing evidence have demonstrated how agricultural production challenges can be tackled using biotechnology, and how it can directly contribute to food and nutrition security, poverty alleviation, job creation and sustainable economic development.

The verdict is that GMOs live up to the promises of biotechnology industries in helping to feed the world. This is why “the increased aggressive push for biotechnology and effective biosafety” in Nigeria by all stake holders as Science has prevailed at last.