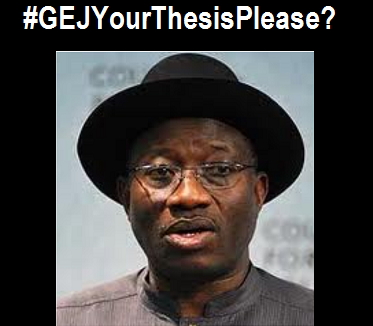 An open letter to GEJ media aide, Ikechukwu Eze in his defence of GEJ’s Academic Certificates. If you miss the initial report, read it HERE .

Mr. Ikechukwu Eze, you do not need to stress yourself. Everybody knows that GED started a doctoral program which he did not complete. Therefore, it is not only deceitful and mischievous to have been parading himself as Dr. Jonathan, but it is equally fraudulent, and if it is in saner clime, he should be cooling his feet in jail for academic fraud.

And in case you do not know, starting a Ph.D. program is not synonymous to acquiring it. And the reason is simple, even though space may not permit, however, I’ll summarize.

A doctoral degree has its unique process which primarily grooms the candidate to become an independent scholar as highlighted below. Please note not honorary doctorate ooo!

Therefore if you wish to defend your principal, then you may want to ask “Dr” Goodluck to provide you with the following to show to the world that he truly has a Ph.D. as he claim:

During the build up to the 2015 election and the issue came up, notable Nigerians called on Mr. Jonathan to defend his doctorate degree claim, but he kept to paly dumb.

Pastor Bakare challenged him to provide his doctoral thesis, but Jonathan kept mute likewise all his retinue of aides could NOT utter a word in his defense.

In the same vein, Prof Tam David West made spirited efforts to get a copy of his doctoral work in Uniport but found nothing.

He even went as far and offering money to anyone that has any information on Jonathan’s doctoral work, but nothing came. Perhaps you do not know, a doctoral dissertation or thesis is like a golden fish that cannot be hidden.

It’s usually very few hence should be available in Uniport if he does have one. Unlike like bachelors project or master thesis, a doctoral dissertation is a researcher’s contribution to knowledge, and it will be surprising to see this effort being rubbished and you just paly dumb!

Therefore if ex President Jonanathan cannot provide certificates to back up his claim, let him just revert jeje to Mr. Goodluck Ebele Jonathan, BSc, M.Sc., GCFR after all he has achieved a lot more than many doctoral degree holders; so what’s the fuss about a doctorate?

However, all these scandals and many others simply attest to the prevailing moral and ethical decadence in the country called Nigeria.

A country where when accountability is now seen as a witch-hunt. A country where genuine statements of national importance and concerns are rapidly giving way to mudslinging, hero-worshipping, and rabble rousing designed to score cheap political points.

It is in this same Nigeria that a former speaker of the house of assembly which was impeached on his admittance to having forged university certificate, yet found his way to become a member of university governing council, Habah, Ki lo dee!!!!

A country where it took ABU over two weeks of abracadabra to resolve the rigmarole surrounding Senator Melaye’s bachelor’s degree status.

Please note, it only took few hours of inquiry for Harvard University and London School of Economics authoritatively to confirm Melaye did not do any masters program at both prestigious institutions but a week leadership course in Harvard!

Sadly in the case of Nigeria, it took an idle VC of ABU who may not even be in the position to know what transpired years back to be making statements.

This is not only ludicrous but also humiliating as it turned poor VC into a comedian in a circus called the hallowed chambers.

On a lighter note, Its obvious the contradictions in Dino’s certificate are indictments on the credibility of ABU, and rather than make a press release or statement to either confirm or debunk the allegation like Harvard and LSE; our own VC went to the Senate cap-in-hand to assuage their nerves! What a shame?

Come to think of it; Senator Dino should be brandishing his certificate as his usual practice (if he has any) instead of beating about the bush in apparent bid to buy time to co-opt the VC into their new movie script.

Truth be told, DINO DID NOT GRADUATE period, and it is obvious, ABU is merely covering up!

Abracadabra, the more you look, the less you see…!

I rest my case