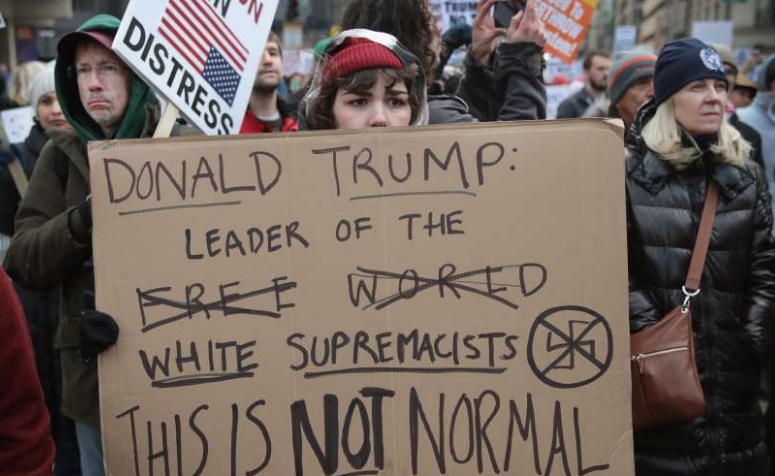 Africans in the US would today join their counterparts from Haiti, El Salvador and other countries in a rally to protest against U.S. President Donald Trump’s alleged racist remarks.

The rally would also hold in New Jersey, Atlanta, Houston and across other major U.S. cities.

The organisers of the event urged all people of African descent and others to attend the rally to “reject the denigration President Trump uttered against us”.

The U.S. president reportedly made the comment during a meeting with congressional leaders in the Oval Office on Thursday.

“Why are we having all these people from shithole countries come here?” Trump allegedly said after being presented with a proposal to restore protections for immigrants from the countries in question.

The protest tagged: ‘Rally against Trump’ at Time Square on Monday, would commemorate the Martin Luther King Jr. (MLK) Day., which celebrates the death of the civil rights icon.

The Day is a Federal holiday in the U.S. falling on the third Monday of every January and this year marks the 50th anniversary of the death of King, who was tragically assassinated on April 4, 1968.

“In response to the comments made by President Trump on Thursday about countries including Africa and Haiti, please Join Mayor Bill de Blasio in denouncing Trump at a rally at Time Square on Monday.

“On MLK Day, New York City will take a stand for our sisters and brothers from Haiti, throughout Africa, El Salvador and other nations in the diaspora that have become targets of President Trump’s hatred and bigotry.

“This moment is too critically important for us not to come together.

However, Trump had, while signing the proclamation for King’s Day on Wednesday, said the late civil rights leader “dedicated his life to a vision: that all Americans would live free from injustice and enjoy equal opportunity as children of God”.

“His strong, peaceful, and lifelong crusade against segregation and discrimination brought our Nation closer to the founding ideals set forth in the Constitution and the Declaration of Independence.

“Today, as we come together to honour Dr King, we know that America is stronger, more just, and more free because of his life and work,” Trump said.

Continue Reading
You may also like...
Related Topics:president, protest, racist, us

Photos: 5th Largest Diamond Ever, 910 Carat Diamond Found In Letseng Mine Lesotho South Africa
Married Ugandan Man In Trouble After Getting Stuck To Girlfriend In Hotel