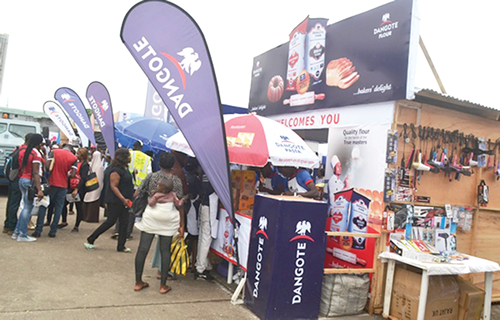 The concept behind the fair according to the organisers, LCCI, is aimed at exhibition of goods and services, a meeting point for investors all over the world and a strategy for businesses and trade promotion. Despite a trade fair held at a recession period, the usual participation in numbers, the thrills and frills that usually characterize the event was very much felt. The usual social networking, blaring of local and foreign music kept the commercial scene lively. But what was lacking was the patronage and purchasing power of participants. For instance, coordinator of LG electronics stand who simply gave his name as Mr. Chukwuma, lamented the very low patronage on their products.

“I want to tell you the patronage is the poorest after day six of the ongoing trade fair. People just gathered around, moved about and window shopped, but how many of them actually bought items? I paid over N2 million for a 153 Square metre but the sales recorded have not paid one fourth of that amount. Last year’s fair was far better than this year’s.

TB Joshua Lashes Back At Nigerians Over Failed Prophecy “We Are Not On The Same Level”
Yinka Adeparusi Is Dead: Missing Nigerian Journalist Dies In Motorcycle Accident In Abuja