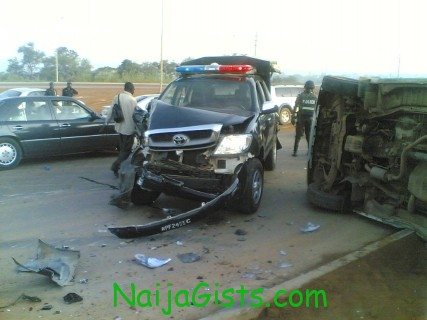 Delta State Governor, Dr. Emmanuel Uduaghan‘s convoy, was this evening at about 6:30pm involved in what eyewitnesses described as a ghastly accident, which left several persons with various degrees of injuries naijagists.com.

According to eyewitnesses, the accident occurred at Ibusa, on the Asaba-Ughelli expressway when the governor and his entourage were said to be returning from an official engagement.

An eyewitness who was at the scene attributed the accident to the recklessness of drivers in the governor’s convoy who chose to occupy the entire road. The source said that following the reckless occupation of the centre of the road, a commercial vehicle which was attempting to negotiate a sharp curve in Ibusa lost control and somersaulted repeatedly into a nearby bush, and leaving the occupants of the ill-fated vehicle with wounds.

It was learnt that immediately the incident occurred, Governor Uduagha responded with concern, alighting from his vehicle and ordering that the victims be rescued with some of the vehicles in his convoy and taken to the hospital for treatment. The accident and the response caused an unprecedented hold up.

When Saharareporters reached the commissioner of information, Chike Ogeah, regarding the accident, he denied the version of the story that the accident was caused by the governor’s convoy. He claimed the governor was acting as a good samaritan by alighting from his official vehicle to assist accident victims in Oleh.

However, an impeccable source in the convoy however confided in this reporter that that account is simply the official line, that everyone in the convoy was warned to say in the event of any questions.

The state Public Relations Officer of the Federal Road Safety Commission (FRSC), Mr. Jeff Otubu, said he could not confirm to this reporter if it was the governor’s convoy that was involved in the accident. He confirmed that officials of the commission had been dispatched to the scene of the accident on a rescue mission and promised to get back to the reporter as soon he obtains details on the accident. As of the time of this report, he was still being awaited.( saharareporters)