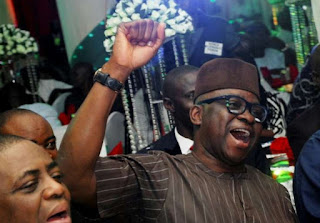 Wednesday January 24, 2018 – Religious Gate Keepers In Nigeria & The Political Sinners Who Patronize Them For Prayers

The late Professor Chinua Achebe in his book “The trouble with Nigeria”, had rightly attributed the challenges of Nigeria to leadership failure. Leadership of any kind is a very serious business that should at best be left in the hands of real serious minded people.

Leadership especially political leadership is a tool to make positive change in the society. The absence of visionary leaders in a nation leads to outright doom, tragedies, catastrophes and challenges such as the current and past challenges Nigerians are experiencing.

Recently in Calabar, a high tension wire sparked and fell down and burnt down houses, killing three people, a male student of Cross River University of Technology (CRUTECH) and a young nursing mother and the baby. This is not the first occurrence of such negative incidence in Calabar.

Similar tragedy had occurred in Calabar, in a football viewing centre, killing several youths and injuring several others as well. When tragedies of this nature occur, accusing fingers quickly point to witches and wizards by religious gate keepers and their blind followers.

Nigeria as a country and Nigerians as citizens still have thousands of hectic bridges to cross. Businesses are crippled due to lack of electricity. The generators they use pose health challenges to Nigerians. On daily basis, we keep hearing and reading stories of cancer and other epidemic and disease outbreak. To an average Nigeria it is the handiwork of witches and wizards.

The state and federal roads they ply and drive their rickety cars are nightmares. There are countless instances of negligence of leaders that have direct dire negative consequences on Nigerians too numerous to mention here.

In Nigeria, hardly can you go to any religions gathering without hearing frog noises and frog songs about witchcrafts and vain prophecies on materialism. With the proliferation of religions centres here and there, and their noises and songs including their vain prophecies about ephemeral and transient things, there is nothing to point to as breath-taking and earth-shaking invention which has a direct impact on humanity worldwide.

Were Mark Zuckerberg to be a Nigerian, he would have been going from one religions centre to another seeking for solution to unemployment. He would probably have been selling water in sachets as a graduate or driving Keke Napeb, insulted and harassed by touts for tax and other levies. Zuckerberg would have been on his way out of Nigeria seeking for hope in other countries.

March 2013, millions of Nigerian graduates where gathered across all the states of the federation by visionless leaders for immigration job recruitment where 19 graduates died in the midst of the stampede that occurred due to uncontrolled crowd. Was it witches and wizards that caused their death? Who then are these witches and wizards?

Accepted the military messed up the and institutionalized corruption, the advent of the democracy in 1999 would have been a period of massive infrastructure revolution but it has been a case of total failure on the part of these political sinners and masquerades parading themselves about in corridors of power.

Nigerian leaders are still living in dark shadows of ephemeral and vain pursuit; that is why we have nothing to show and prove to the whole except corruption in high places, fast food and religious centres sprawling and springing up here and there making foolish noise about witches and wizard. Nigeria is really in the bottom of the whole among comity of nations.

With their silence, evil has taken over and has resulted in what Prof. Soyinka described as ‘’vicious circle of national stupidity”.

[About the author: Udom Dominic Bassey writes from Calabar]