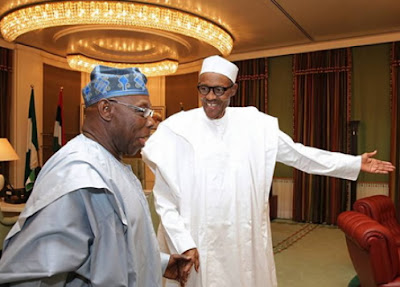 Events in Nigeria’s political landscape have never ceased to lose a bite of drama. And while we have sorely missed the ones in the comedy category, we have endured the tragic ones prevalent, and still counting. However, feel free to name the category of the new series starred by the renowned statesman and former president, Olusegun Obasanjo.

In the open letter “The Way Out: A Clarion Call for Coalition for Nigeria Movement”, the former president summed up some of the intriguing challenges of the Buhari-led administration, outlining clearly the areas deserving of a small round of applause, and those filling the holes of disappointment. The headline however, is that Obasanjo, explicitly and implicitly, drew the curtain for Buhari against seeking re-election in 2019. But, having the smidgen of knowledge about the former president, one needs to be careful with his ‘wise’ words, either side of winding down the glasses to peep at the untold, muted, disguised and out of the surface disposition credited to the outspoken man. He really is that much of a complex character. Let us x-ray this new thriller.

For a start, Buhari has failed to live up to expectations in some areas since the infamous 2015 general elections. That’s understandably true and it would only be idiotic to claim otherwise. Yet, the man has overachieved in some areas equally of importance and such must not be jettisoned to the cesspit. But, by admonishing Buhari to call it a day, Obasanjo has simply scored an expensive own-goal by throwing the towel. As someone with his wealth of experience about governance, it is criminal to write an administrator off in such short, hazy, and impatient manner. It is worthy to state that in the event that OBJ happens to be PMB at this point in time, in same circumstances, he, OBJ wouldn’t have done any better. It took the man eight good years, yet, he left knowing that much needs to be done, and, is in fact, yet to be done. Isn’t it why he arguably sought for third term? No leadership thrives with short tenure stamped by inexperience. A little stroll down the history lane would expose the fact that PMB did overachieved, in comparison to his second coming, during his short tenure as the head of state. So many uncountable projects could be traced to him, at a time and age you and I know that many would fail and be shielded in the court of dexterity. Democracy has changed the man, the system, the growth, and the development. PMB could have done more if it were still military regime. What did OBJ achieve in his first tenure as head of state?

Put it simply, to write Buhari off following three years of assuming the hot seat is sentimental, unjust, selfish, cruel and least expected from a respectable leader and statesman. It sums up his faith, which are yards away from the pulpit of optimism. His convictions, which is begging to get license for a bigger picture; his words, a living statue of discrepancies and inconsistencies. And above all, his wisdom, taking the whips of logic. One would expect clarity of premises to strengthen the towel throwing, rather than an act of shooting self on the foot! Take a look at this verse in the letter:

“If things were good, President Buhari would not need to come in, He was voted to fix things that were bad and not engage in the blame game.”

Take away the last two words, it’s something we have chided the administration on, and urge them to jettison it by actions. Look at the honest angle of the situation as at 2015 and tell me why something is not wrong in the logical puzzle of the statesman. You simply can’t take him off the picture for failing to jet off at a time when expectations are beyond mortal apprehension. Even some machines function better as they grow in usage talk more of a complex being expected to be the messiah that even the critic, despite spending huge number of years in the number one office couldn’t be.

Also, the idea of a statesman is begging for more theoretical underpinnings by the activities of some of our statesmen. I know a statesman is supposed to be like a bridge to the incumbents, making subtle suggestions, proffering wealth of experiences and urging for the need to act in line with antecedents of similar events. I for one don’t really understand why being a statesman means compounding problems. The timing of this letter itself is suicidal. It shifts focus to a debate that takes resources away from being assembled where they are needed. It creates psychological chaos, heat the polity and even make situation worse by renewing boring debates.

“…this is no time for trading blames or embarking on futile argument and neither should we accept untenable excuses for non-performance.”

Isn’t this boring to hear? Is it a new premise in the debate?

More importantly, someone appears to be playing “god” here. That portrayal of omniscience in leadership that has made the man carve out some niche for himself, like someone who had attained the zenith while in office, is synonymous of a perfectionist in the field where it is vague. If OBJ is close to the title he awards himself, no disrespect, Nigeria would have been among the comity of nations, barging shoulders with the superpowers and bragging about the development ratio. Don’t go far; look at South Africa for instance. Can Nigeria stand with temerity in the same box, with her counterpart, in the debate about development despite having a “god” as President for eight years? The feeling at some quarters is that the “endorsement” of this “god” is the guarantee for the top spot, a spiritual blessing that is a “can’t do without”. Little wonder why they insisted that the former principal failed in 2015 for simply missing the “oil” of anointing by the “god”.

As for the ruling party APC, testing times are unavoidable. Just like Buhari, shutting the party out this early, giving its first taste of power after so many years in the opposition seat is massively the height of impatience that can lead to rounds of continuous trials and error. Revolution, reformation and true change take time in every clime where it has been experimented. The below statement by OBJ is undermining really.

“…they have given as best as they have and as best as they can give…to ask them to give more will be unrealistic and will only sentence Nigeria to a prison term of four years if not destroy it beyond the possibility of an early recovery and substantial growth.”

Does the above mean that nothing positive can come out in the second tenure of PMB? Where is the faith here? Where is the belief he once had in this man? Where is the optimism expected by a statesman?

The Nigerian project is one that must undergo turbulent periods to be successful. It is in the spirit of rising each time we fall that Nigeria shall be great “again”, if I may employ the word. In the meantime, what is before us is the “lesser evil conundrum”. Nigerians will have to assess their best option in the absence of many. While it is too early to start the lesser evil debate, it is too early to talk about 2019. It is far too early for a vote of no confidence by the respectable statesman. After all, Paris was not built in a day!

Continue Reading
You may also like...
Related Topics:Buhari, criticism, obasanjo

Police Intercept 40 Fulani Herdsmen With Cows On 3 Speed Boats In Asaba, Send Them Back To Kogi
An Open Letter To Niger Delta Avengers