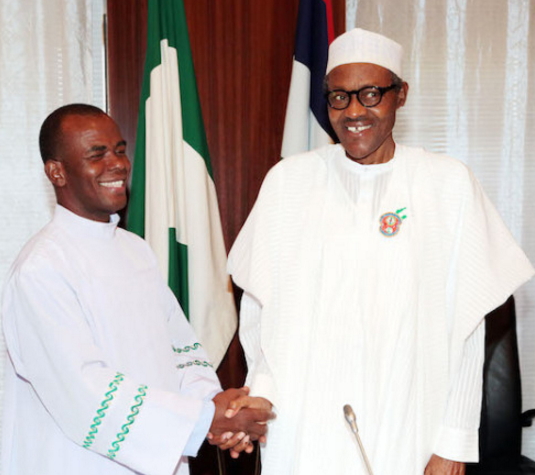 The founder of Adoration Ground in Enugu has lashed out on rumoungers who went about saying that Buhari’s wife, Aisha Buhari rejected a bag of bibles he gave her during her recent visit to Enugu.

The man of God narrated how God used bible to deliver him from an assassination attempt on his life.

This Wicked Generation. His life did not only come under threat but he faced real assassination attempts by hired as­sassins who fired several bullets at him but instead of the bullet penetrating him, they were received by the Bible in his car. About 14 worshippers were killed at the ministry’s prayer ground with poison­ous gas at that time. There were petitions against Fr Mbaka here and there to sanc­tion him and close down the ministry. It was such a challenging period in the min­istry but the ministry survived it. There were many other challenging periods that I wouldn’t want to go into because I know you would be more interested in the con­temporary.

I would say that of recent, the prophetic message of the spiritual director of the Ministry on December 31st night of 2014 titled, From Goodluck to Badluck where­in Fr Mbaka prophesied that the then incumbent President Goodluck Jonathan will not return to the seat of power and that President Muhammadu Buhari will defeat him during the 2015 general elec­tion posed one of the greatest challenges to the Ministry. This was because the prophesy came at such a time it appeared impossible, going by the factor of power of incumbency and every known political permutations that were at the disposal of Goodluck.

Fr Mbaka and the Ministry came under sharp satanic criticism immediately after that prophecy, his life came under intense threat and danger with many political swords drawn against him and the min­istry. Some worshipers and even some of his close friends deserted the ministry. He was accused of taking bribes, he was ac­cused of having an oil block and some others said Buhari had led a high pow­ered delegation to bribe him before the message when in actual fact he had never had any previous contact with Buhari . Fr Mbaka was branded a political priest with people making caricature of his name in the print and social media . There were calls for sanctions against him and to close down the ministry by many politi­cal agents and even some members of the church hierarchy that was meant to protect him. His bank account was placed under scrutiny by federal security agents. The fate of the ministry hung in the balance. It was either that prophecy of December 31st night came true for the ministry to survive or it came false for the ministry to go into extinction. In the end, the Holy Spirit in whose name he prophesied the message vindicated him and the ministry as the prophecy came to pass.

Many questioned why Fr Mbaka had to visit President Buhari. Those disparaging remarks were actuated by jealousy and chronic envy among Christians nowa­days. Fr Mbaka had faced even more sa­tanic blackmail and devilish character as­sassination than this. It didn’t start today as he had faced worse criticisms in the past. We tend to forget that the scriptures told us in Psalm 105:15 “Touch not my anointed and do my prophets no harm”

Is it a crime for a man of God to visit the President? Apart from being a priest and an anointed Prophet of God, is Fr Mbaka not a Nigerian? If yes, has he no right to enter our Aso Rock (the Presidential Villa).

For visiting Mr President has Fr Mbaka done what is unscriptural? In Exodus 5, did Mosses a prophet of God not visit Pharaoh in his seat of power in Egypt? Did Samuel not visit Saul in his seat of power in 1st Samuel 15? In 2nd Samuel 12, did Prophet Nathan not visit David in his seat of power? Did we not read about Elisha and Ahab in the scriptures, in 1st Kings 17? In Acts 10 did Peter the first pope of the Church not visit Cornelius in his house? Did we not read in the Bible that even Jesus himself left heaven and came to man on earth? Is it not the hall­mark of a real and humble anointed man of God to do what the biblical prophets did? We wonder why those whose in­sinuations of what transpired during the meeting between Fr Mbaka and Mr Pres­ident are poke nosing for. Did Fr Mbaka himself not answer their questions in the interview he granted the media dur­ing the visit when he stated that he had come to bless Nigerians and pray for their peace? This was aired on Channels, AIT and published in some newspapers. Those who say Fr Mbaka came to be settled by Mr President or that he came on Biafra agenda are on their own. Like I said, Fr Mbaka is not new to such accusations but one thing is clear, Fr Mbaka is not a Ghana-must- go-prophet. Even his accus­ers know this fact and that was why I said earlier that they make those speculations out of sheer envy and chronic jealousy.

The truth is President Buhari’s wife vis­ited Fr Mbaka but what you heard that Fr Mbaka gave her Bibles and she rejected them was a lie from the pit of hell. Why should any right thinking person believe that? Is Mrs Buhari not the wife of the President who is a president of Christians and Moslems in this country? It was a rumour spread by those very people who had sold to us the campaign dummies and propaganda that President Buhari has an agenda of Islamizing Nigeria to water down the terrible blow dealt on the past administration by Fr Mbaka’s message of divine choice of Buhari to salvage the country from monumental corruption, in­security, unemployment and poverty that bedeviled the nation. 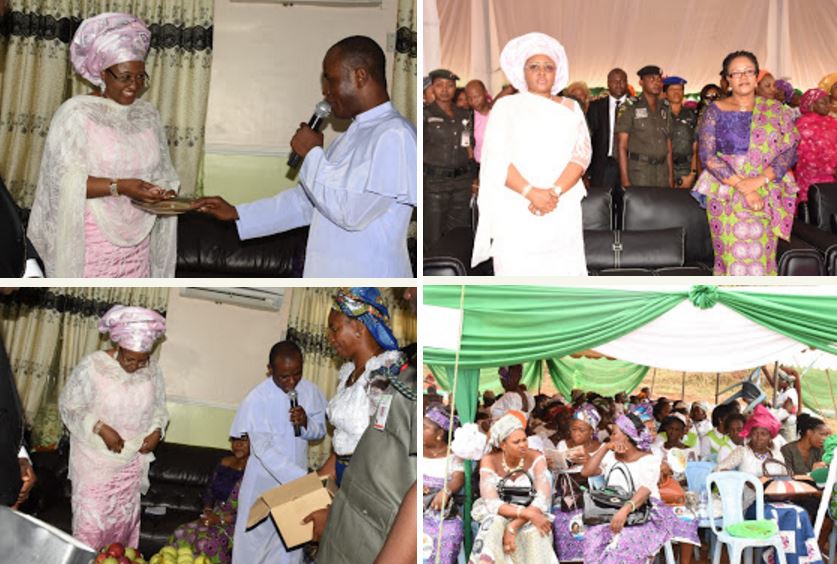 The truth is that Fr Mbaka did not only give Mrs Buhari a Bible during her visit, he gave her a bag of Bibles which she received for herself and others that accompanied her with cheers. He also gave her cartons of Rapha Extra virgin anointing oil among other presents which she received with cheers and ap­preciation. Pictures taken at that occasion is there for anyone that cares to see.

Adoration people worldwide know who Fr Mbaka is in matters of morals and chastity and we are happy with him. He is such a man that practically lives a life of fasting and outpouring for the needy.

Nigerians are happy with him. We con­tinue to appeal to him not to leave Mr President to fall into the hands of hawks and vultures. We urge him not to mind the accusers and the critics but to keep pray­ing for Mr President as a product of his prophecy. His detractors are just looking for a way to ensure that President Buhari fails so that they would face Fr Mba­ka. We urge him to keep blessing Nigeria and Nigerians.