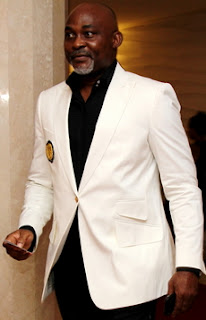 This was made known by his Father, RMD in a text message he sent to colleagues few hours ago. “Pls save 12th & 14th Dec in ur diary for the union of our son Kome & his love Eniola, pls keep them in your prayers and more updates to come later. Warm Regards JMD & RMD”

Kome Mofe Damijo is graduate of the University of Winnipeg in Manitoba.

He is the only child of RMD’s first wife, May Ellen Ezekiel who passed away in 1996.

Late May Ellen was a Nigerian journalist popularly called MEE in the early 90’s.

After her death, RMD married Jumoke and the couple has 3 children.
In total, RMD has 4 children.

Congrats to Richard Mofe Damijo on his son’s achievement.