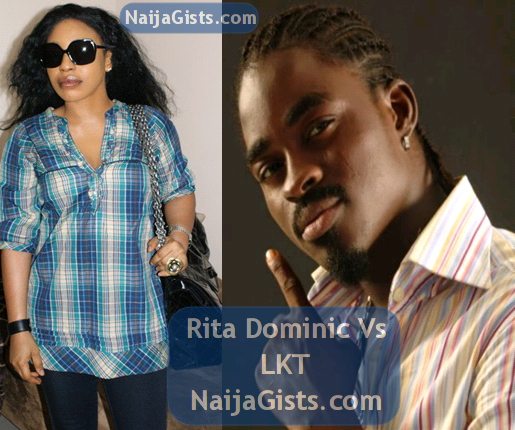 December 1st, 2012 – Rita Dominic Gets Marriage Proposal From Nigerian Artist LKT – I’ll Give Her A Set Of Twins”

In the revealing interview, the artist said he is not kidding neither is he looking for cheap publicist.

He promises to marry Rita Dominic and give her a set of twins because he is a carrier of twins genes.

“I’ve been dating Rita in my dreams and I’ve always loved to see her movies. When I read her interview, something in me said I should voice out my admiration and affections for her. “If truly her heart desire is to have a set of twins, I can give her that. I have got twins in my genes. It might sound awkward or a joke, but I’m not kidding; nor am I looking for cheap publicity. “I would have approached her a long time ago, but I thought she was already taken by another man. Even if it turns out that she is older than me, I can live with it. Age is nothing but a number,”

Rita Dominic recently reveals in an interview that she would be happy to have twins after she settles down with the right man.

For those who do not know him, LKT sang in the then popular Yahoozee song by Olumaintain few years back.

He’s also the guy who sang the popular follow follow song ft P-Square. Listen to it below

This na serious matter o. Aunty Rita yes or no?