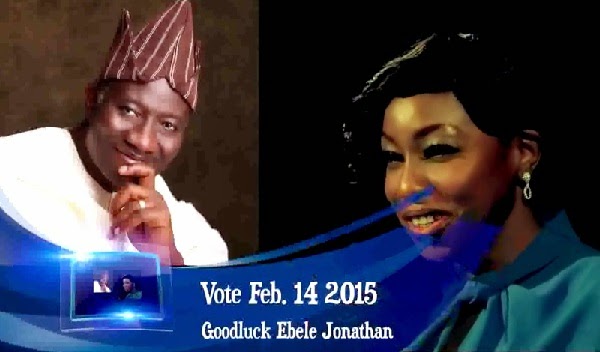 Rita Dominic said she is voting for Jonathan again because he has a long list of achievement not recognized by the media. The movie star said Jonathan signed Freedom of information bill into law and allowed women into power. Rita further said she believes Goodluck Jonathan will tackle the issue of security in the next four years without any assistance.

I have followed the 2015 election with keen interest and have deduced that this is definitely a critical vote in Nigeria’s young democratic history. As a result I feel that this is not a time to keep silent in the face of the trials and tribulations we face as citizens of Nigeria.

First and foremost, I would love to make a passionate appeal to my beloved fans and generality of Nigerians by saying that by God’s grace, there will be life after the elections have come and gone. We should not destroy relationships or in some extreme cases resort to violence because our choices of candidates differ. I have noticed that there seems to be so much intolerance for the views and choices of others, which has resulted in cyber bullying and intimidation. Voting is a constitutional right and a matter of personal choice and it is important that we respect this.

That said I would like to let everyone know that I will be voting for President Goodluck Jonathan and Vice- President Namadi Sambo on February 14, 2015. I have outlined some of the major reasons for my vote in a short video titled “I will vote again” directed by Mildred Okwo below.

Rita Dominic’s endorsement message sent to the media by Gej Till 2019 campaign team.