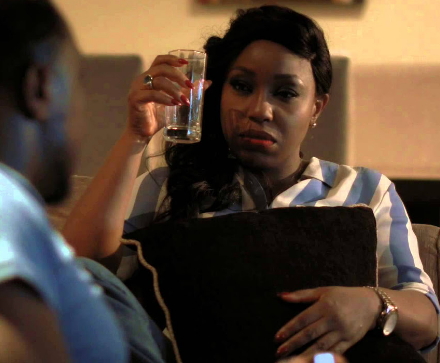 Nollywood actress Rita Dominic recently talked about her role in 76, a hit movie that took the spotlight last year. She also briefly discussed her role in “The Guest”, a new movie directed by Christian Olayinka.

It’s been a while you acted with Ramsey Nouah before you got paired in ‘76’, how was it acting with him again?

It was fun because we were in Ibadan for six months shooting 76 and I’ve known Ramsey Nouah and Chidi Mokeme from way back, so it was like working with your brothers and friends in Nollywood.

These are very great talents as well and for me I like to act with actors who understand their roles and those they’re acting alongside. Though we had other challenges on set, it wasn’t with the actors.

After you acted with Femi Jacobs in ‘The Meeting’, there have been about two more movies you did together and it seems there’d be a lot more…

The funniest thing is that none of them was planned; okay, the one that was planned was The Meeting.

That is his first major film and we held an audition and he was impressed with us the most for that role.

Subsequently, maybe after other producers watched that film, they liked us together and started casting us together.

It’s not a planned thing. Sometimes I’d get a script and ask, who is playing let’s say my love interest and they’d say it’s Femi Jacobs. So, I think you have to ask the producers why they cast us together.

There was a part in the movie, The Guest, where Femi Jacobs grabbed your butt…

Yes, it was part of the script. In fact there were even more in the script but I couldn’t do a lot of them.

Does your chemistry with Femi Jacobs onscreen transcend beyond the set?

Femi and I are friends. Just like what you said about Ramsey Nouah, Chidi Mokeme and I. I think when you’re friends with someone outside, it helps with the onscreen chemistry because we’re first of all friends.