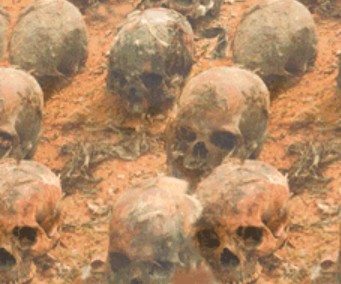 The Police authority in Ogun state has discovered a secret ritualists den in Ewualase Village, Ogijo, behind NNPC Mosinmi depot, in Sagamu Local Government Area of the state. naijagists.com

Mr. Ikemefunna Okoye, Ogun state Commissioner of Police who spoke with reporters and police men round the shrine for on the-spot assessment yesterday said the discovery was made on Monday.

According him, the Ogijo Divisional Headquarters through high level intelligence gathering learnt about the shrine, the operations of the suspected ritualists and went into action.

He said: “I gave them directives and they swung action that eventually led to the arrest of two people at the shrine. For now all we can say is that they are using this place for either rituals or to defraud people or both”.

Okoye assured that the Command would do thorough investigations on the activities of the suspects, adding that the two suspects arrested would be charged to court after completion of the investigations.