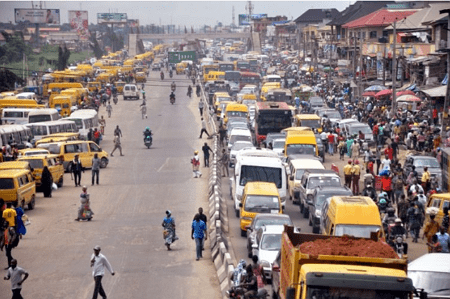 Street trading and roadside parking have for long been a major cause of traffic gridlock in Lagos State.

There is, however, divergence of opinions on what should be the response of the state government to street trading, in particular. Some are of the view that government should not enforce ban on street trading on the account that it is an integral part of African custom and tradition.

It is, indeed, difficult to see how a phenomenon that promotes child trafficking, misuse of public open spaces, insecurity on the highways, environmental degradation and violation of human rights could be allowed to thrive in any modern society.

‘More organized parking and market facilities within Lagos state will not only prove to be an income generator, but such could also help in reducing traffic congestion which is partly caused by indiscriminate parking along the largely congested streets’

Many have lost their lives while jogging or walking along the road. No thanks to roadside parking! Consequently, many who would have loved to engage in walking for pleasure and fitness have to think twice before engaging in such a risky venture.

No matter how much energy that is put into courting foreign and local investments, the enabling environment must, first and foremost, be created before such investment could thrive. Traffic gridlock is, no doubt, bad for business. And roadside parking and street trading are partly responsible for most Lagos traffic gridlock.

A study conducted by the Lagos State Metropolitan Area Transport Authority, LAMATA, has aid credence to this. The study reveals that no fewer than 10 vehicles vied for parking spaces every 10 seconds at every street in the state. This has often left all streets clogged with motor vehicles, with many being parked at the roadside, or on the walkways, while others had to make do with double parking, blocking on-coming vehicles leading to traffic jams especially at the peak hours.

The study further states that the menace of street trading, especially by street hawkers, seriously complicates the traffic situation in the state. Despite the huge resources that the state government has committed into education, street trading partly contributes to low academic performance and outright school drop-out by children in the state.

In a study carry out in Epe division of the state, among child traders, 70 per cent of them admitted that street trading had a negative effect on their reading schedule, while 79.2 per cent reported that it affected their school attendance rate. No responsible person should be happy seeing children in uniform or mufti hawking goods at hours when they ought to be in schools.

Many children have sustained lifelong injuries through street trading and hawking. Moreover, children who engage in hawking or other forms of hard labour may physically wear away before they actually reach the productive age in the economy. Many children had died as a resulting of hawking in traffics through accidents.

With all the environmental menace and insecurity associated with street trading and roadside parking, it is quite obvious that it could birth other social and security problems.

It is, therefore, essential for Lagosians to pay attention to government in its bid to rid the state of this evil duo. Our collective efforts should be geared towards ensuring a secure and safe Lagos that works for everyone.

Undoubtedly, more organized parking and market facilities within Lagos state will not only prove to be an income generator, but such could also help in reducing traffic congestion which is partly caused by indiscriminate parking along the largely congested streets.

If this is properly addressed, it will not only create an enabling environment for everybody to live, it will also improve the condition of living of everyone in the areas concerned.

Perhaps, more importantly, every resident of the state must be ready to work with the government in ensuring that law and order are maintained in the state.

A major difference between the animal kingdom and human societies is that the latter thrive on law and order. We must all be ready to abide by the laws of the land, and if there be anyone that contravenes the law, the law must take its full toll on such. We should not allow the inaction of a few people to continue to bring untold hardship on the majority.

About the author: Tayo Ogunbiyi is of the Ministry of Information and Strategy, Alausa, Ikeja, Lagos