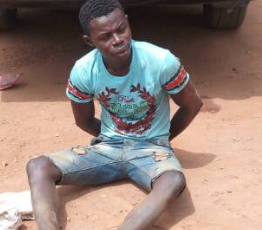 2 suspected armed robbers have been arrested by policemen in Niger State.

One of the robbers, Shehu Illiyasu said that he feel no remorse in committing the crime, adding he would do it again if given another chance.

29-year-old Illiyasu and 18-year-old  Ibrahim Aliyu were trailed and arrested by policemen after robbing one Adamu Mohammed of his motorcycle.

According to Illiyasu, he went into armed robbery due to economic hardship in the country.

“I don’t have a job to take care of myself, hence I start robbing people to make ends meet. I can’t stay without money.

“I didn’t go to school. My parents didn’t support me but if somebody can buy me a commercial motorcycle, I will use it to make money for myself and I will not steal again.

“However, I feel no remorse, if given the opportunity again I will commit the crime because the situation is bad. Nothing works in this country, people are suffering a lot.”

Continue Reading
You may also like...
Related Topics:armed, police, robber