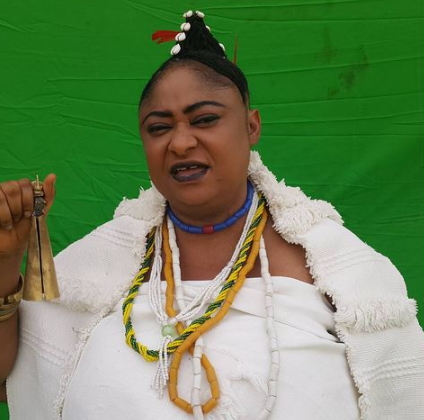 This is what the actress said about the upcoming movie.

‘Osun, the Yoruba Goddess’ is based on a true-life story.

The Yoruba race is losing its culture. Some say Yoruba gods are fetish;; I don’t agree with that. I am a Christian and I know Jesus came to this world for everybody, and for me especially.

I just sat down and said to myself ‘if I don’t do this, who will correct those who feel that Yoruba gods are fetish?’ Is it all pastors that will go to heaven? Or you do you think all babalawos (herbalists) will go to hell? God doesn’t judge anybody;; you just do what you feel makes you happy. I have not been to India but I watch Indian films a lot. They still practice the Hindu religion and there are Christians and Muslims among them. The Chinese have churches but they still do their cultural thing, so why are we shy about our gods? It really baffle me. The film is almost done now and I want people to see that God wants us to be who we are. God also wants me to be Yoruba and that is why I was born and brought up in Yorubaland.

If God wanted me to be an American, he would have made sure I was born there.