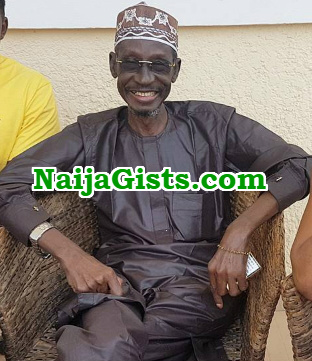 September 15, 2017 – Sadiq Daba Seeks Donation As He Opens Up About Battle With Leukemia

Nollywood actor Sadiq Daba is currently struggling with his health with a public appeal being made to well-meaning Nigerians to come to his aid.

It is no longer news that seasoned broadcaster and actor, Sadiq Daba, is down with leukaemia. Unknown to many of his fans and admirers, the actor, whose role in Kunle Afolayan’s award-winning film, ‘October 1’, attracted a lot of attention awhile ago, practically lives on a drug called Gleevec, used for the treatment of the disease.

Although he gets supplies of the drug free-of-charge from the Obafemi Awolowo University, Ile-Ife, courtesy of a donor agency based in the United States, it is very expensive off the counter and can only be obtained from the institution.

“To get the drug at OAU, you have to go through a process of evaluation. Then you are recommended to the foundation that supplies the drug. But, if you are going to buy it off the counter, a pack of it will cost you about N1.7m. And this will last for three months,” he said, in an interview with a Punch correspondent in his Lagos residence.

Daba’s battle with leukaemia started toward the end of 2015. The disease virtually caught him unawares. At first, he had thought that he was having the first symptoms of a minor ailment.
“I thought I had malaria fever. So I went to a hospital in Abuja for a test. After a series of tests, the doctor was shocked. He told me that what I had was beyond them at the hospital. He advised me to seek help from a tertiary institution. The tertiary institution, in this case, simply refers to a university teaching hospital. That was in 2015.

“Then I went to the Dermatology Unit of the Lagos State University Teaching Hospital and it was confirmed that I had leukaemia. Fortunately, the disease was not overblown yet. It was still at the early and manageable stage. I was placed on drugs,” he recounted.

But, midway into the treatment of the ailment in 2016, Daba had a relapse and he was hospitalised for about three months. “I was rushed from my residence to the Lagos State Emergency Unit. Again, I was fortunate to encounter a group of dedicated and courteous medical staff there who took great care of me.

I was placed under observation for 48 hours and, thereafter, they wheeled me to the General Hospital where I was admitted,” he said.
He recalled that during his stay at the hospital, which lasted two months, the chief medical director of LASUTH came on a ward visit and recognised him as he lay on his sickbed.

“It was nice that he visited the ward at that point because my bill was almost over N1m. The good doctor went on to slash the entire bill by 50 per cent. I will never forget that,” he said.

After leaving the hospital, Daba started attending a dermatology clinic where he met one Dr. Balogun, a consultant on dermatology, whom he described as a “fantastic person”.
Although the doctor placed him on a regular diet of drugs, it failed to solve his problem.
Eventually, she advised him to go to the “only medical centre in Nigeria where leukaemia patients are treated and the right drugs are available” for the treatment of the ailment. That centre is at the OAU, Ile-Ife.

“She gave me a referral letter. But I was scared because there was a proviso that I might undergo a bone-marrow surgery. For the first two months, I could not go to the university simply because I was trying to avoid the surgery,” he said.

While he struggled to overcome his fright, the broadcaster had another relapse. This time, he was warned that he needed to go for proper medical treatment at OAU. Somehow, when he got there the doctors had to skip the bone-marrow operation and he was placed on drugs.

Daba was full of praises for the team at the Department of Dermatology, headed by Prof. Mohiz Durosinmi, that handled his case. “Prof. Durosinmi’s team was absolutely fantastic. Otherwise, I would have been dead,” he said.

The doctors also warned him not to skip the drugs, donated to OAU by the Max Foundation, even for one day. For this reason, he has visited the university from his residence four times.

However, wondering what would have been the situation in the absence of such collaboration between the foundation and the institution’s dermatology department, he said, “If the Max Foundation had not been doing this and as a patient, you were to spend money for treatment, you would be dead.”