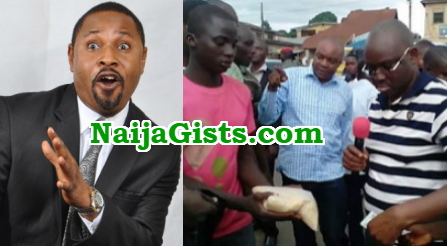 My plan for the New Year is simple, it’s to move on, do my work the way it should be done. I have been made the ambassador of health and my association, The Golden Movie Ambassador of Nigeria (TGMAN) takes it to the next level, actualize her real vision. And, my job going to locations regularly and producing movies for people to see, bring out the creativity in me and show to the whole world to see and champion some campaign on the things that are going wrong. May God be with us.

We see less of Yoruba movies showing in cinemas. As a veteran in the Yoruba movie sector, what is responsible for this?

Let’s get one thing clear, movie has no language. Movie is a moving picture. So, if you call me Yoruba actor, I just answer not to make you think I’m arrogant. I am a moviemaker, I am an entertainer. Secondly, as for Yoruba films not going to cinemas, we are coming there gradually; if we can start by doing it for six states, I mean the Yoruba-speaking states, and then have the movies subtitled for non-Yoruba speaking audience… Possibly the Yoruba moviemaker have not looked much into that area and I am sure, it is not only Yoruba movies that are not in cinemas. I was really shocked when I got to Kogi State and saw a lot of Igala and Ibira films.

Could you recall the first major movie you featured in?

The first time I faced the camera – I think that was in 1978 at NTA. It was a television programme. The first movie I featured in was in Kwara State then. That was a long time ago, I can’t remember the year, it was a cellulous film that never saw the light of the day. I think it was in 1984. That’s what I can recall for now.

As a popular actor, do you have plans to venture into politics?

I would say, yes and no. Being a good actor doesn’t mean I may have a good sense of government but if the Lord says yes, I can never say no. However, for now, I don’t think so; it might be in the future.

How do you rate the present political leaders?

I will say one thing, and I would want my fans out there to please pardon me, those who also watch my films should pardon me. But truth must be told, it is the masses that turned politicians to businessmen. It is the masses that empower politicians to play us like Ludo or chess game. Why, a man wants to contest for a political post, and you did not ask for his legacies; where is he coming from? Before contested, he started giving you rice, doing drama, and giving you money. You were collecting his money. It is obvious he is only investing the money. He is going to make back is money and even make extra. So, where do you want development to come from? Before we chose our next leader, let’s look at their legacy. Let’s give the youth the chance to rule. Let’s stop collecting money and rice from politicians.

As a handsome man, have you ever been sexually harassment by a female fan before?

Handsome or no handsome, a lot of actors, a lot of known faces and a lot of celebrities would’ve been so harassed at one time or the other. So, I have, but God is always in charge and I thank God.

How much will you charge to act nude?

Do you ever regret choosing acting as a career?

I’ve never regretted being an actor. An actor is like a messiah, we are like prophets, we remind people of the past, show them today and make them see into the future. So, I thank God even with or without money, I thank Him for who I am today.

How favourable is the Bank of Industry loan to Yoruba movie sector?

Recently, Minister of Information and Culture, Alhaji Lai Mohammed set up a review committee for the MOPPICON bill. How has this helped the filmmakers?

Alhaji Lai Mohammed is one of the most listening Ministers, we have free access to him at any time, but the MOPPICON thing is sad, we spent months, days, sleeping at job, sitting and putting heads together, writing these things out. The committee has worked; it’s left for my honourable minister to see to its approval.

At times, I feel like crying to know that a film producer will only get 30% while the cinema house gets 60 or 70% of the proceeds from a film. At the end of the day, the producer will run at a loss. We must have a structure. We are begging, and I am sure the minister is listening. He is a good man. I stand by him any day because he has contributed a lot to the industry. He will surely be remembered for his positive impact.

As the president of Golden Movie Ambassadors in Nigeria, what is the aim and objectives of this association?

The primary goal of Golden Movie Ambassadors of Nigeria is to rebuild and restructure the movie industry. Our members should be able to have a gain of being an association not just sitting down to talk.

How do you think that actors can enjoy quality health services?

Recently, the University College Hospital (UCH), Ibadan, headed by Prof. Temitope Alonge made me the ambassador on health, not for my name sake, it is for me to work out a pact with my association. We will work together to look into our health matters and prepare for the future. Therefore, when there is any health issue, we won’t be seeking for public help, left and right.

How would you feel if you get a role in a Hollywood movie?

Everybody prays to step into the highest level. If I have a role in a Hollywood movie, I will be happy and will thank God. That is a funny question though, I am proud of who I am, I am black and proud, but I will be happy.

As an actor who acts both in English and Yoruba movies, which of these sectors is more rewarding?

Both are rewarding, depending on how you package yourself. Like I said, a movie has no language. Yoruba and English movies are both rewarding, it all depends on your presentation. If you invite me, I see both as equal and I charge for it. It is a moving picture that is what I charge for. So, it depends on you, it has nothing with one language or the other. As for me, they are both equal, and I charge depending on what I want to do.