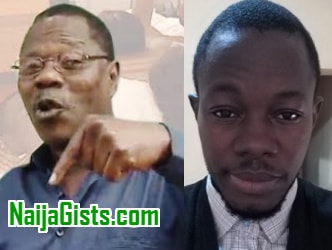 Sam Loco Efe Was Planning Retirement By Building A Farmland In Abakaliki When He Died – Son, Omoruyi Loco Efe

One of the children of late Nollywood icon Sam Loco Efe has relived fond memories he had with his father.

Omoruyi in this chat with Saturday Beats reporters Timileyin Akinkahunsi and Ademola Olonilua said the deceased was a heavy smoker who lived a very strict life.

He added that his strictness caused his family to keep mum about his serial smoking habit.

“Nobody could tell him to stop smoking because he was a very strict person. You couldn’t tell him something like that, so we didn’t see it as our business. However, we really miss him in the house because he had a very good sense of humour but he was a very busy person.

“We all expected him to retire so that we would have enough time to spend with him. He was also planning towards his retirement by building a farm in Abakaliki but death took him away suddenly”.

Sam Loco Efe was found dead in his hotel room on the 7th of August 2011.

Autopsy result revealed that he died of cardiac arrest.

Video: Majid Michel Spotted With Yvonne Nelson Daughter Ryn Roberts
Eniola Badmus: I Was Rejected By Movie Producers Because Of My Weight… Focus & High Spirit Made Me Excel