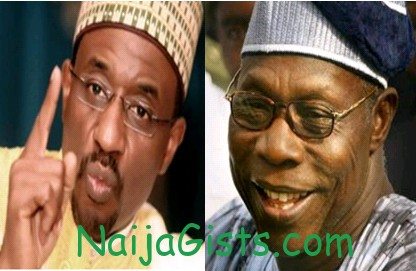 The Governor of Central Bank Of Nigeria (CBN), Sanusi Lamido in a recent speech on the importance of N5000 note on the Nigerian economy blasted former president Olusegun Obasanjo. naijagists.com

Sanusi claims Obasanjo is a good farmer but a bad economist.

He further stated the following

“General Obasanjo did N100 in 1999; then he did N200 in 2000; he did N500 I think two years later; and did N1000. In that period, inflation was coming down because it was accompanied by very tight monetary and fiscal policies during his reforms.

“For somebody who have gone through that to come and stand up and say ‘introducing a higher denomination causes inflation’ I don’t know if somebody wrote his speech. I’m trying to see him or if he was misquoted.

“If he actually said that then he must be the single most important determinant of inflation in our history given the number of notes that he introduced,”

You can fast forward it to 0.50 to hear his remarks