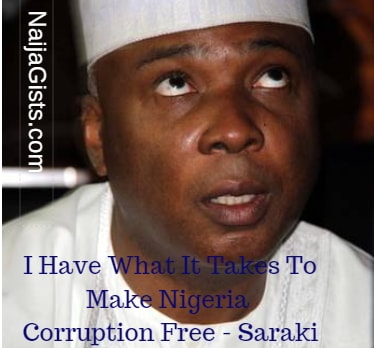 Saraki: I Made A Deal With PDP To Run For President Before Defecting From APC

Saraki has revealed his plan to run as the next president of Nigeria.

In a report released by the Bloomberg yesterday, the controversial Senate Boss said he struck a deal with his former party prior to his defection from the APC.

Here is what he told the news agency:

“I am consulting and actively considering it. I believe I can make the change,” he said.

”If a government can go and lock up an arm of government — and it’s never happened in our history — we should all be very concerned, we should not be surprised that they would use security agencies for elections.”

Saraki said Nigeria needed to be governed by a genuinely pro-business administration that will be able to tackle recurrent security issues.

“Most of the inflows that have come in are merely hot money, and that is because the oil price has gone up. Investment in the real sector is not seen.

“The private sector, in my view, has probably taken a position that the confidence is not there in the government.

“The country requires a government that is truly pro-business and a president that sees himself as a chief marketing officer.

”There has been a persistent disregard for due process and a lack of neutrality for some of these issues. For you to have credible elections, you must have safe elections. Security agencies are actively getting involved in the politics.”

“The fundamentals of whatever we are going to develop is going to be based on sound democracy, credible elections, freedom of choice of Nigerians. If we don’t have that as a foundation, then everything else cannot happen.”

“If we are going to have a subsidy, we should have a budget for it. Because once we have a budget for it, the private sector can also play a role in the importation of petroleum products. And if the private sector plays a role, definitely the cost of the subsidy will go down and there will be more efficiency in the delivery of products. But in the environment we are in today, where it’s only the Nigerian National Petroleum Corp. that’s doing that, it’s going to be inefficient, it’s not going to be transparent.”

Speaking on the deal with the PDP, he said:

“The PDP has learnt its lesson from the loss in 2015, and I think unfortunately the APC did not learn from their victory.” While negotiating with the PDP “we listed a number of issues. We talked about how to sustain and improve the fight against corruption; the issue of providing more powers to the states; inclusion and having a more nationalistic approach on things we do; to continue to improve the environment that will ensure investments. We listed a number of items during the discussions with the PDP, and there is a written agreement to that. We trust that we can hold them to that.”

“We would ensure that the party is strong on security. The APC too has not done well on the issue of security. We have the opportunity with the right kind of presidential candidate and president to provide the leadership for the party. The party has a good opportunity to lead the country in the right direction.”

Tambuwal, like Saraki and Atiku defected from the APC to the PDP because of their presidential ambition.

Continue Reading
You may also like...
Related Topics:corruption, nigeria, saraki