In the historic election scheduled to hold on Saturday the 28th of March, Nigerians will be coming out en-mass to break a 30 year hold on the reins of power by a former military dictator, Ibrahim Badamosi Babangida.

Babangida came to power through a military coup that toppled one of Nigeria’s more promising regimes, that of ex-general Muhammadu Buhari and Brigadier Tunde Idiagbon in 1985. Since then Babangida has maintained hold of the reins of power directly and by proxy. The ex-president promised as he “stepped down,” “I will be back,” and he was.

Dictator Babangida had handed over in 1993 to a civilian stooge, Ernest Shonekan, shortly after Babangida’s second in command, General Sani Abacha retrieved power from their stooge. After Abacha died or was killed in August of 1998, Babangida’s cousin, and adopted brother, General Abdusalami, both Gwari people (As children, Abdusalami Abubakar’s dad adopted orphaned Babangida) was made president of Nigeria. Notice the “i” at the end of the names, Abdusalami and Badamosi. 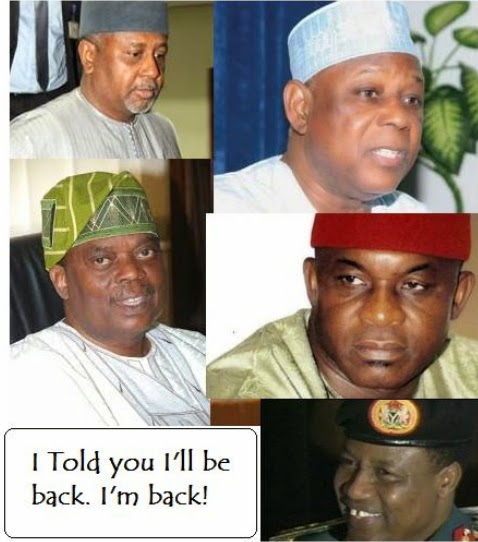 Abdusalami Abubakar immediately prepared to transfer power to civilians. Together with Babangida and other members of the dictator’s inner circle, they planned a transition. Babangida and Lieutenant General Aliyu Mohammed Gusau, the Director Military Intelligence, DMI during Buhari’s time who together with Babangida plotted the coup to sack the Buhari/Idiagbon government, again together founded the People’s Democratic Party, PDP and in 1999 decided to hand over to a former soldier and pal, General Olusegun Obasanjo.

When Obasanjo was invited to rule again by the Babangida-Gusau crew, he famously asked, “how many president’s do you want to make of me.” Babangida installed Obasanjo through a rigged election process conducted under his brother, Abdusalami Abubakar. Thus Babangida retained power in the fourth republic.

It was decided that Idiagbon had to be killed and he was allegedly poisoned in a visit he was summoned to in Abuja. Brigadier Tunde Idiagbon threw-up throughout his journey back to Ilorin and died shortly after to pave the way for the PDP. [As regards this particular narration, I was a physical eyewitness.]

Obasanjo’s regime was handled and monitored by Babangida and his men with Babangida’s right hand man, Aliyu Gusau as the nation’s NSA, National Security Adviser throughout the Obasanjo tenure. NSA Gusau is noted to have supervised the founding of MEND in the south and Boko Haram in the north.

Obasanjo later handed over reluctantly to Yar’Adua/Jonathan of the PDP Babangida party; later when Yar’Adua passed in 2010 (or perhaps was poisoned for as some say, for betraying the interests of the founders of the PDP party) Goodluck Ebele Jonathan took over the reins of power with a promise to continue to deliver the nation to Babangida and co.

Under Goodluck Ebele Jonathan, Babangida’s men were quickly restored to all chief positions of government: Aliyu Gusau was immediately restored the the most sensitive security office, the office of the National Security Adviser, oNSA. Sambo Dasuki (Gusau’s foster brother with the duo inheritors of Babangida’s wealth by blood and marriage — Gusau married to Jamila, late Dasuki’s widow) … Sambo Dasuki, who was the Aide-de-camp to president Ibrahim Babangida was soon made NSA after Gusau resigned from the post to contest against Goodluck Jonathan and his replacement Gen. Andrew Azazi had been resigned (Azazi was killed in a helicopter crash later the year he had implicated the Babangida PDP party in Boko Haram terror).

Colonel David Mark who was minister of communication under Babangida’s regime and is popularly remembered for allegedly saying, “telephones are not for the poor,” was soon made the nation’s senate president. David Mark supervised the senate and nation’s oil industry ensuring oil blocks remained within the Babangida club and the illegal kerosene subsidy with $100 million in paupers’ funds transferred to cabal pockets every month remained unhindered.

After Gusau’s presidential ambition was defeated in the notorious PDP primaries that Azazi had commented of, Gusau was soon returned to the nation’s defense office as minister, to supervise the “war” against Boko Haram.

Other Babangida boys like Jones Arogbofa were also returned during the Jonathan regime as chief of staff, to keep a tight control on Nigeria.

It appears all Babangida’s boys simply hung their military fatigues and put on civilian garb to resume the Babangida dictatorship, civilian style via the PDP.

So as Nigerians go to the polls this Saturday, they are not only desperate to try a change in government and let go of a PDP party that has supervised the establishment of terror across west Africa, compromised one of Africa’s best armies, mismanaged and subsequently privatized all public assets, gifting these to the cabal, and watched over the gradual impoverishment of the people and the enthronement of the cabal, now recognized as the world’s top private jet club; the people are also going in earnest to vote out the Babangida 30-year hold on power.

Nigerians are excited at the prospects of a new dawn.

Article Authored  By Dr. Peregrino Brimah, [Every Nigerian Do Something]