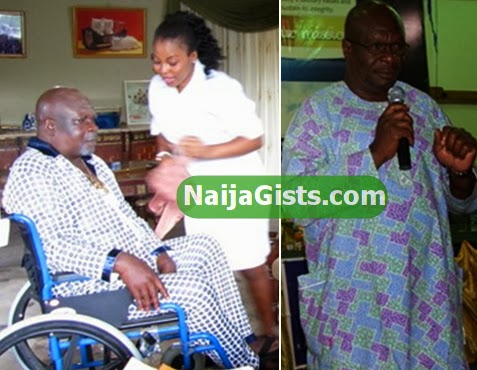 April 25, 2017 – See What Olumide Bakare Said Last Year About The Heart Disease That Killed Him

How did the sickness start?

It has started since 2013 but it wasn’t as bad at it is now, we have treated it but you know things like that don’t go easily. About 15 days ago, the sickness resurfaced and I was rushed to the emergency unit of University College Hospital, Ibadan where I have been admitted.

What were the symptoms you saw before you were rushed to hospital?
I wasn’t feeling anything, it just that I fell critically sick and I was brought to the hospital for treatment.

What did doctors diagnose when you were brought in?

After the test was conducted, the result revealed that I am suffering from “Dissecting Aortic Aneurysm and Pulmonary Embolism” which has to do with heart related issues. From the diagram, it showed that there is a blockage in the vein that takes blood to the heart.

We learnt that the injection you take daily cost #40,000 daily, how factual is that?

What was doctors’ comment on the cause of the ailment?

Initially, I was diagnosed with blood clot before it affected the heart.

When you were diagnosed with that, was it neglected or you actually treated it?

It was treated. It is a thing that when it gets started, it is not something that heals on time.

It can be managed if at the end of the day it doesn’t arrive at surgery.

I have been managing it before the heart problem set in. I am so sorry that I can’t continue this interview any longer. I think I have given you enough information. Thank you”.

May His soul Rest in Peace.