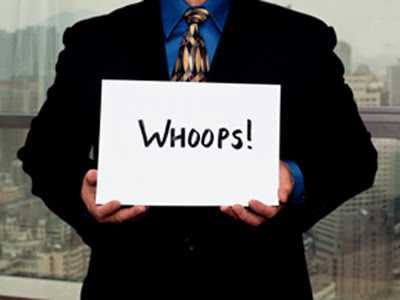 June 4th, 2013 – Seven Mistakes You Must Not Make On Your Present Job

Seven Mistakes People Make At Work & How To Avoid Them

Every employer no matter how mean their offer may seem would always expect some level of maturity from employees. Unlike what we wished it was, real people with financial responsibilities get fired on a daily basis without a second thought as to what they feel or how that would manage to provide for their families. In a world where even intelligent and key employees are always being shown the door, a few common mistakes that working class people make could not be timelier.

1.    Taking your familiarity with your boss for granted. Many working class people work in places where they have very cordial professional relationships with their bosses. In fact some world-class companies have created working environments where everyone addresses each other on first name basis. Many young people are convinced that their bosses are gullible and are often tempted to play smart. The effect is a very deadly one; some bosses will wait for you, others will set a trap while some others will come after you. One of the things that drive men to do the unthinkable is when their ego is hurt. You don’t have to look down the barrel of a gun to believe it is capable of causing fatal harm.

Don’t be caught in the temptation of trying to think that you are smarter than your boss, you might be sailing a faulty boat across very dangerous waters. Some ladies often think that playing the seductress with the boss will actually get them somewhere. Well it might work for a while but everyone knows that no matter how good you might be at seduction, when the challenging work needs to get done, you are as irrelevant as a cathode ray desktop monitor; in which case you might stop a moment to consider your true situation.

3.    Growing on the job. I have learnt something the hard way, success is no respecter of age. Many people are actually slow learners; there is nothing wrong with that. Some move at the speed of light, others at the speed of sound; it would not matter if you are moving as fast as a snail or you are just dragging along but just move, albeit steadily for if you make the mistake of remaining stagnant, one thing is sure: you will be crushed. The workplace does not understand the language of stagnancy, if it would not matter one bit that you may be the oldest employee, if your Key Point Indicators (KPI’s) are always showing red, your days are surely numbered and you may have run out of relevance in a working environment that moves at the speed of light. No matter what your workload may look like, learn, improve and add more value, grow don’t allow the job weary you and be active for the working place is no resting place, neither does it have regards for people who sleep on the job.

4.    Growing rusty on the job. This is one place many people get an F. With the rate at which inter-company competitions and demands grow, a whole lot has changed. They expect you to read your mails as they come in and reply immediately irrespective of where you may be or what you are doing when it dropped into your inbox. You may have to represent your company before a board of directors to convince them how your company would be the right choice to do business without being informed 24 hours before time. You are expected to work till late in the night and also take work home, it would be a most deadly offence to just go with the flow, doing the least possible job expected of you and nothing more.

5.    Abusing certain other privileges. In many offices, access to internet is without big brother staring from behind you. Many young people have an F here too. They just go online and Facebook the whole day. Some others don’t even Facebook much but they keep glued to their screen all day watching porn, forgetting that the network has an administrator who may keep details of each person’s internet usage and submit to the company for appraisal. In some other workplaces, the internet is not the problem. The problem they have is that they are allowed to use their mobile phones and it has proven to be a deadly mistake for they keep glued to it all day especially the blackberries and i-phones; and all these people expect to be paid at the end of the month.

6.    Playing with deadline. Many young working class people still think that they are still in school. In school they don’t get the motivation to read until they hear the exam bells ringing, actually they don’t do more than lift a finger until they are face-to-face with deadline for submission of their work then they begin to run around eventually ending up with the poor quality work which eventually counts against them. Some other are caught up in the very lie they always tell themselves, thinking that every other person will buy into it. They think that they are very smart people and that it is only the work they submit to the company that it will use, since they are the only one professional in that field working in that company. Too bad they don’t know how wrong they are until they get sacked.

7.    Thinking you boss is exploiting you. This one right here is a very controversial one, you applied for a job and the responsibilities of the position that you applied for was foretold you and you accepted. So you resume work and then you are frustrated and you are trying to take it out on the business. Capitalizing on their self-justified anger you sit on the job, doing as little as possible (oftentimes you do no work at all) and at the end of the month, you want to go home with your paycheck. My argument is not that he is exploiting you, my argument is that if he is, then you should let go of the job. If you do the work well, you are by extension doing yourself a favor for if you do no work and the company goes under, you will in one way or the other be affected. If you are too angry with him, set up your own company and hire other people, but if you are going to earn that paycheck, it would be better if you rid yourself of that complain-stained attitude and get back to work.

About the author: Ifeanyi J. Igbokwe is a seasoned writer, motivational speaker, consultant and an action coach with special interest with personal and corporate growth and effectiveness.
Twitter: @igbokwe_ifeanyi
E: ifeanyi.igbokwe@gmail.com

Be Strong & Never Give Up – Strength From The Inside Is A Catalyst To Overcoming Life Problems
People’s Opinions Don’t Matter, Shake Them Off & Fulfill Your Destiny