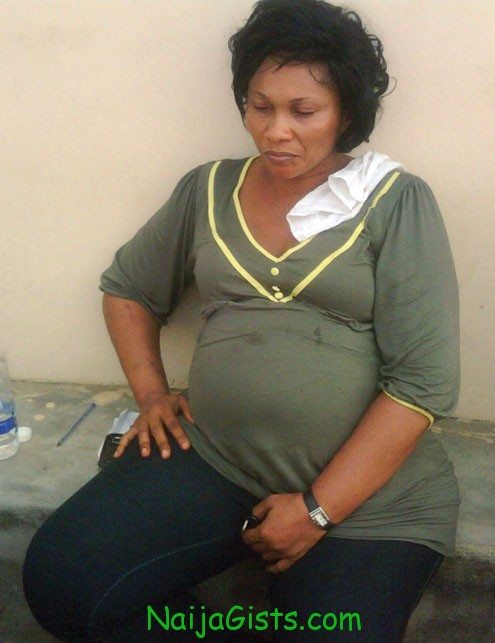 The police at Ajao Estate division, Lagos State, southwest Nigeria have arrested a businessman, Solomon Iwuchukwu,  for allegedly attempting to strangle his pregnant wife, Ifeoma, who denied him sex. naijagists.com

The 54-year old Solomon who hails from Mbaise in Imo State and  lives at 21, Anthony Udoh Street, Ajao Estate, told the police at the station that since he returned from abroad, his pregnant wife had refused to have sex with him. He said that she locks her room and always refuse him entry. “And she doesn’t come into my room to sleep, either,” he added.

Ifeoma, 33, is eight months pregnant and expecting her baby.

The businessman became a guest of the police when he allegedly forced his way into his wife’s room and attempted to have sex with her by force. He allegedly held her by the neck and attempted to strangle her before she was rescued by her sister living with them. It took the intervention of a team of police officers from Ajao Estate Station who raced to their house and arrested Solomon to bring the situation under control.

The shocked woman, it was gathered, took her two kids to the station for protection and told the police that she will not go back to their house because Solomon threatened to kill her and her unborn baby.

Narrating her ordeal to P.M.NEWS, Ifeoma disclosed that her problem started last year when her husband returned from abroad and opened a sachet water factory at Sango, Ogun State.

She said he could not manage the business and it collapsed. She said the money he invested in the business went down the drain and he started blaming her for his woes. “Since then he turned his anger on me,” she stated. She explained that she had been a constant victim of battering by her husband and she had no place to go with her two children because she is an orphan.

She said appeals by her relations and police to her husband to stop beating her fell on deaf ears.  She also denied starving him of sex, as he claimed and wondered why he should still be sleeping with her at this advanced stage of her pregnancy, adding that he knew her medical history of losing pregnancies before delivery.. “He doesn’t treat me as his wife at all and believes that I am his property to be used at will,” she added.

She said she is helpless because of her condition and did not know what to do.

Meanwhile, a non-governmental organisation, International Charitable Initiative for Girl-child and Women Foundation has stepped into her case.

During her visit to the station to see the embattled housewife, the president of the Foundation, Barrister Helen Ibeji, described the action of the husband who is detained at at the station as inhuman, barbaric and uncalled for.

She disclosed that her foundation decided to intervene in the matter to protect the woman and the unborn child.

“A man should treat his wife with respect and dignity,” she submitted. When asked to comment on the matter, the divisional police officer, Mr. Oliver Amaechi declined but assured that his men were investigating the matter and will take appropriate action(pm news).