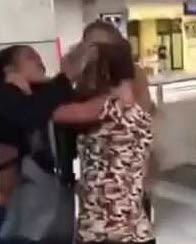 Check out this viral video of two Nigerian women said to be from Benin city in Edo State allegedly caught fighting like kids at a train station in Europe.

The two reportedly started fighting before they reached the train station where the fight turned aggressive.

Those who knew them said they are both prostitutes fighting over a client.