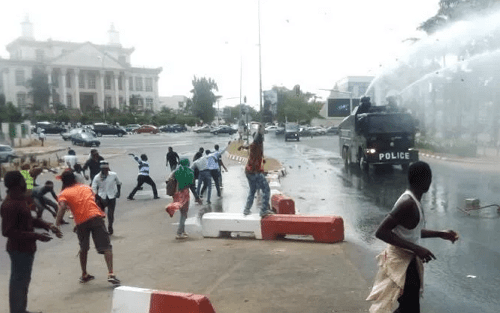 The Islamic Movement Of Nigeria (a Shiites group) yesterday clashed with police in Abuja.

The clash happened at the Eagle Square, Federal Secretariat and near the Ministry of Foreign Affairs building.

The protest centered around the release of their leader, Sheikh Ibrahim El-Zakzaky led to a massive war that claimed the lives of 12 people.

According to eyewitnesses, the police prevented the protesting Shiites from storming the Federal Secretariat by firing gunshots and tear gas even as the protesters forced their way through the area.

It was gathered that the attempt by the police to disperse the sect members failed as the security details appeared to have been overwhelmed by the surging protesters.

The protest, which began from NITEL Junction at Wuse 2, was said to have been disrupted by policemen who condoned off the road leading to the National Assembly and the three Arms Zone. 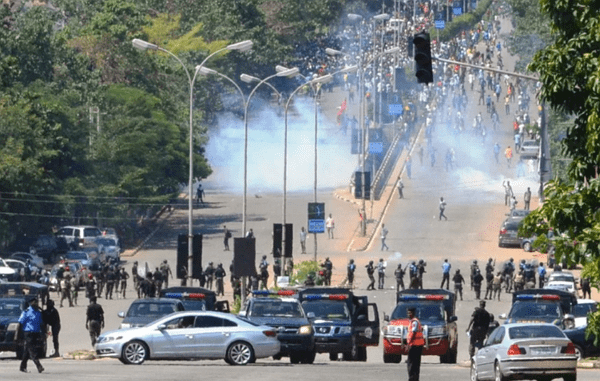 According to eyewitnesses, live ammunition was allegedly fired at the protesters as they advanced and made their way toward the Eagle Square and the Federal Secretariat.

The sustained shooting, it was learnt, led to commotion and pandemonium as workers and passersby ran for their dear lives.

The clash sparked panic as anxious workers at the Federal Secretariat, commuters and motorists fled the area.

There was a terrible traffic jam at the city centre, which forced many motorists to abandon their cars.

One of our reporters sighted the five bodies around the Federal Secretariat.

At the National Emergency Management Agency (NEMA) substation close to the Federal Secretariat, one water tanker and one operational vehicle stationed at the sub-station were set ablaze allegedly by the protesters.

Cars at the general motor park behind the Eagle Square were vandalised by the protesters.

The back windshield of a car at the National Assembly car park was shattered by what was described as “stray bullet”.

The sect members retreated when they noticed that the security operatives had overpowered them.

Some security agents in army uniform were observed helping the police to contain the situation.

The sect members were said to have infiltrated the FCT Central Business Area from Maraba and Nyanya in Nasarawa State.

Traffic was heavy on Keffi-Abuja Expressway as soldiers conducted a stop-and-search operation.

IMN spokesman Abdullahi Musa said 10 of its members were shot dead; several others were injured.

A journalist identified as Precious Owolabi lost his life to the violent protest. He died of gunshot wounds at the hospital last night.