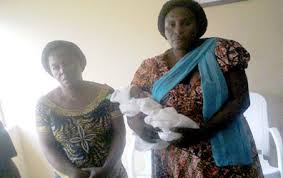 In a news briefing in Calabar on Thursday, Calabar Police spokesman, John Eluu, said that on October 27, the police received information that one Miss Maria Ekanem who was delivered of a baby two weeks ago was negotiating the sale of her baby.

He said that Ekanem allegedly negotiated with one Mrs Sunday Abang, the matron of Sedatoe Maternity Clinic on No 2, Umon Street, Calabar South, for sale of the baby. The PPRO added that one Dr Okokon Offiong, who runs Evangel Clinic, was also contacted to sell the baby. He said: “Ekanem went to where she and the buyers had agreed to meet at Inyang by Fuller Street.

On arrival, she was given N20,000 as part payment for the transaction. “On receipt of the information, a team of police detective swung into action leading to the arrest of five suspects, and the recovery the baby boy and a white Toyota RAV4 Jeep with registration No. JP 493 ABC used during the operation.

Eluu, who said investigation was still ongoing, promised that the suspects would be charged to court as soon as investigations were concluded. He added: “We assure members of the public of the command’s resolve and preparedness to wage war against all forms of crimes and criminality mostly in these ember months. “We are warning all troublemakers that the command will not spare them in her effort to weed criminal elements out of the state.”

However, Ekanem said she had no intention of selling her baby. She said she wanted to give out the child for proper care since she could not afford to take care of the child.

She added: “I have no intention of selling my child.