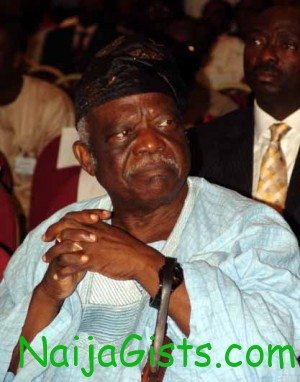 Ex Nigeria’s Ambassador to Ethiopia and popular broadcaster, Olusegun Olusola who passed away in Lagos, Nigeria on Thursday the 21st of June, 2012 has left many in disbelieve.

Mr Olusegun Olusola died at the age of 77.

Olusola became famous with his epic programme Village Headmaster, which he created and directed on television. It was one of most popular television sitcoms in the 70s and early 80s that ran for over a decade before it was taken off the air.

He expressed sadness that the country in recent times had lost icons like Sam Loco Efe, Ashley Nwosu and Ernest Okonkwo.

“I will miss him; unfortunately most of the foremost broadcasters in the country have died and that is very sad. A lot of people in the movie industry are gone while some are ill,” he said.

Sympathizers were seen thronging his Lagos residence to condole with his family and the details surrounding his last moment on earth were still sketchy.

Ambassador Olusola was married to Elsie, a former TV presenter and actress, who played the role of ‘Sisi Clara’ in the Village Headmaster who died in 1993. The couple had three children: Ronke, Jimmy and Toyin.(Gist Express Magazine)