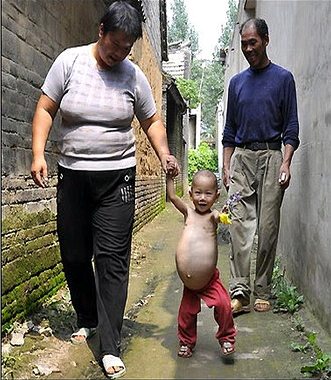 Believe you me this world is full of shocking and unbelievable medical mishaps. naijagists.com

The case of Kang, a little one year old chinese girl who was discovered pregnant with her twin brother shocked many.

How Kang’s Parent Made The Shocking Discovery

Her parent couldn’t understand why their daughter’s stomach was growing larger overnight and feared it could be a tumour.

Her swollen belly made her look pregnant and drew taunts from neighbours who branded her “a monster but after doctors examined the 18-month old they discovered that she had an extremely rare condition, which affects 1 in 500,000 births – when one twin in the womb grows larger than the other and envelops its smaller sibling. 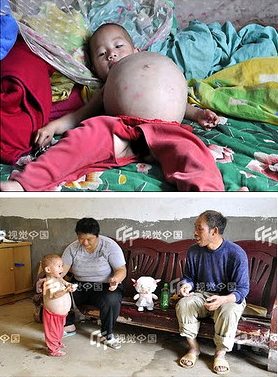 The second foetus never fully develops, but continues to grow within the first baby, feeding off it like a parasite. It left Kang, from Henan Provence, unable to eat solid food and spending her time in constant pain. Kang had already had a difficult start to life.

Just days old, she was abandoned in a field by her biological parents.

Her cries were heard by farm worker Wang Guihua, 35, who took her home and nursed her back to health. Wang and her husband Kang Xiqing, 43, had no children of their own and were allowed to foster Kang.

The worried couple took her to doctors who explained that Kang had an unborn twin growing inside her, and that it was crushing her organs as it grew. Her life was hanging in the balance, but her parents with a combined income of £400 a year, couldn’t afford the £1,000 operation that their daughter so desperately needed.Help arrived in the form of the Red Cross who raised the funds for Kang through an appeal.

She was rushed into surgery and after a grueling 10-hour operation, Kang is now recovering well and will be able to live a normal life.

Her grateful mother thanked the Red Cross, saying: “We’re very grateful. We were so worried she would die. Before she used to cry in pain and hold her bump like a pregnant woman. Now we can hope she can have a normal life.

”Kang has returned to her village in Henan provence and is doing well, she is running round the village with the other children and is eating solid food.Her mother said: “She doesn’t understand what has happened to her. But she is happy.“She still has her womb and ovaries, so one day she will be able to have children of her own.”