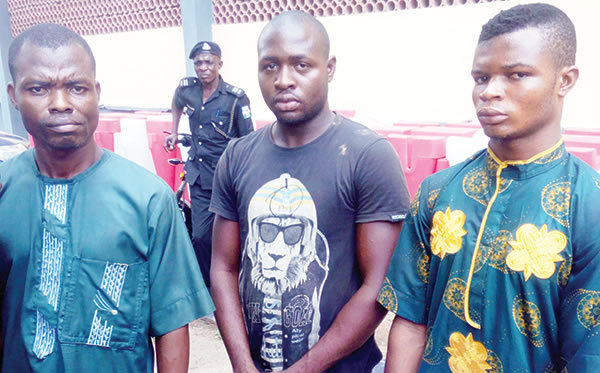 3 siblings, beans traders on Adenekan Street, Alagbado, Lagos State, have been arrested by the police for allegedly selling “poisonous beans” to members of the public.

The police said 41-year-old Faith Ogbona had wanted to influence his brothers’ release by allegedly offering the divisional police officer a N500,000 bribe, which the latter rejected.

The suspects, who hail from Ebonyi State, were paraded on Wednesday at the Lagos State Police Command headquarters in Ikeja with some bags of the “poisonous beans” and some bottles of Snipers recovered from the shop.

The state Commissioner of Police, Fatai Owoseni, said the suspects would be charged to court after investigation.

“The excuse the owner of the shop gave was that he was mixing pesticide with beans and that he had been selling it like that. He approached the DPO, thinking he could easily settle the case and get the two other suspects released. He offered her N500,000, but she rejected it,” the CP added.

The shop belonging to the suspects had been sealed off by police.