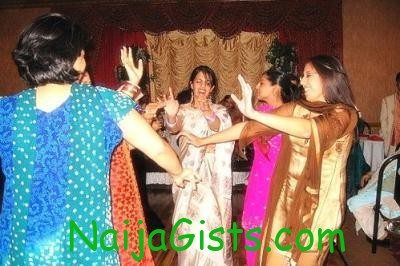 When did dancing and singing at a joyous event become a sin?

Six people (4 women and 2 men) were recently sentenced to death for dancing and singing at a wedding ceremony in Northern Pakistan few days ago. naijagists.com

According to Police report, a popular Clerics issued a decree after a mobile phone video emerged of the six enjoying themselves in a remote village in the mountainous district of Kohistan, 176 kilometres north of Islamabad.

Pakistani authorities in the area said local clerics had ordered the punishment over allegations that the men and women danced and sang together in Gada village, in defiance of strict tribal customs that separate men and women at weddings. “The local clerics issued a decree to kill all four women and two men shown in the video,” district police officer Abdul Majeed Afridi said.

“It was decided that the men will be killed first, but they ran away so the women are safe for the moment. I have sent a team to rescue them,” he said, adding that the women had been confined to their homes. Afridi said the events stemmed from a dispute between two tribes and that there was no evidence the men and women had been inter-mingling .

“All of them were shown separately in the video. I’ve seen the video,” he said. “This is tribal enmity. The video has been engineered to defame the tribe,” he added.