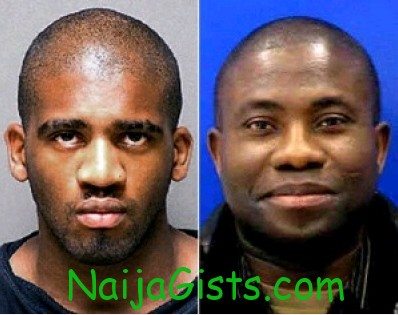 This bizzare new story which involved two African roommates( A Kenyan and a Ghanaian) is definitely one of the saddest news story ever. naijagists.com

To further complicate the matter, he later used his brain and heart for lunch.

Kinyua  has been charged with 1st-degree murder after dismembered body belonging to Kujoe was found in his home 7 days after he went missing.

Alexander Kinyua confessed to police that he also ate his roommate’s heart and portions of the brain after killing him in their Joppa, Maryland town home.

The Hartford County Sheriff’s office said they found the body parts while searching the town home on Terrapin Terrace in Joppa, Maryland, northeast of Baltimore, after receiving a tip from Kinyua’s father.

Police also found a human head and hands in metal tins on the house’s main floor, the Baltimore Sun reported.

The cannibal is a naturalized US citizen born in Kenya.

According to charging documents, Kinyua admitted to eating Kujoe Bonsafo Agyei-Kodie’s heart and part of his brain after stabbing him to death.

Lord have mercy what is this world turning into?