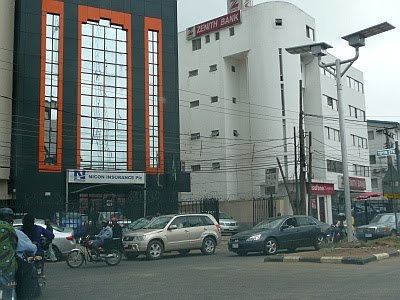 Sunday Sun investigation reveals that no fewer than two of every 10 hotels in Lagos State contracts strippers to dance naked before their customers full-time and some­times on part-time basis.

The most notorious areas where this shameful practice is prevalent are Ikeja, Victoria Island, Apapa, Lekki-Ajah and Ajao Estate. In these places, high brow night clubs employ young girls as lap dancers to satisfy the luscious appetites of men, including expatriates.

In Ire-Akari area of Isolo, for instance, is a street near a Catholic church, which men and women of easy virtue have converted to their own, trading in sex without caution. On this street, exclusive hotels that harbour the strip clubs compete with churches for attention. On a Friday night, for instance, men, who ordi­narily look responsible swarm the frontage of the hotels with exotic cars and spend quality time inside the bars with wom­en of easy virtue. Inside one of the hotels on Alabe Street, nude girls display their wares obtrusively to the admiration of the male customers who flood the pubs to catch fun.

Along Allen Avenue in Ikeja, Lagos, hundreds of girls besiege the hotels and pubs stretching from Allen junction on both sides of the road down to Opebi junction to ‘catch fun’ especially at weekends. Allen Avenue has become the Sodom and Gomorrah of Nigeria where sex, drugs and money are the business of the night as prostitutes and strippers, yank off their mini skirts and under­wears, and entice both men and women to have a taste of their wares.

Every Saturday night, be­tween 9.00 pm and midnight along Allen Avenue opposite Sweet Sensation eatery bus-stop, it is another face of de­bauchery as men and women line up in front of a prominent hotel that has neon light sign indicator to the entrance of the nude club.

The scenes at the night clubs are bizarre and reprehensible.

On a typical Friday night at one of the night clubs in Ikeja a bouncer stood guard at the entrance of the building and a stream of men form a queue to pay the entrance fee of N1000 to gain access into the open room harbouring the dance floor. Once inside the build­ing, sex hawkers in bikinis and provocative attires swarm like bees at the sight of any man, beaming with welcome smiles, all in an effort to get attention. The dance floor is an open space with chairs by the wall. Music is supplied from concealed loudspeakers. As the music begins to blare, one can see the girls giggling and swaying to the tunes. The strippers take turns to enter­tain the guests. The dance steps are mostly obscene, with most of the strippers first squatting to take toilet tissue, rolling up enough to clean off whatever smear the previous dancer had left on the centre pole. That done, the stripper then unveils a weird style of twisting, flexing, rotating and spinning round the pole and throwing herself up before cas­cading upside down or sliding downwards in a slow motion with her legs and feet holding tight at the top pole while her head is towards the floor, like a python climbing down from an Iroko tree, and proudly reveal­ing her vagina by spreading her two legs wide before all men and women. Then she struts her breasts and yanks off her underwear. “Wow, it takes a lot of skill to do just that,” says a customer who was a first timer to the show. “With these high heels they catwalk like models,” he adds with a tinge of satisfaction.

A regular customer reveals that it was the new law impos­ing 14 years jail sentence for gay sex that has restrained the girls and their patrons and pa­tronesses who hitherto engage in homosexual acts in the open in the clubs. The sex hawkers easily go haywire when they sight expatriate men who usu­ally come to unwind. Some of the girls usually release all in to have sex with them. On this partictheir bag of tricks to seduce the men ular night, two of the men opted for oral sex. And they did this before all eyes with the girls moaning wildly.­

There is no dull moment in the clubs as girls with different sizes of boobs, hips and curves kept moving in and out of their inner chamber to reinforce their strategies to seduce men for sex. Most of the patrons declined from having sex, opting instead for the lap dance for a fee of thousand naira. According to a regular male customer, having sex at the VIP inner chamber is expen­sive as it goes for N15,000 just for a short time.

However, flirting with a customer is never a big deal for strippers be­cause two men can share a stripper for a lap dance. Entrance fee to many of the strip clubs on allen Avenue costs N2000 and a patron is expect­ed to buy drinks, which are equally expensive. Closing time at the clubs is 5am.