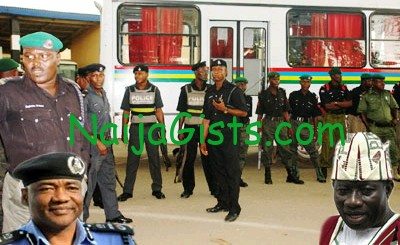 For some time now, Nigerian have had little cause for joy and satisfaction with their appointed minders, the Nigeria Police and other security agencies. naijagists.com

A major consequence of this discontent has been the loud calls for state controlled policing systems (state police)to help check the upsurge in violent crimes and persistent breakdown of law and order around the country. Deriving from that is the expediency of ceding political control of the security machinery in the states to the state governors.

Somewhere along the path of our political development, state governors earned the sobriquet of ‘chief security officers’ of their respective states. Crafty political adventurers have interpreted this to imply that the state governor is a very high official in the hierarchy of law enforcement- somehow combining the powers of inspector general of police and the director general of the State Security Service, not forgetting of course, the commander of the nearest military division. But the tag of ‘chief security officer’, as we recall, is a throwback from the dark days of the coup-prone military era in Nigeria when security was a touchy issue and the leaders could not afford to sleep with both eyes closed. In a democratic setting as we now have, the label may only describe the political will to enhance the rule of law by providing the enabling conditions for the security agencies to perform at their peak. It does not and should not constitute political control of the security apparatus in the states.

Recently, a national newspaper published a damning report on the wanton abuse of power by officials of the Lagos State Transport Management Authority (LASTMA). How prepared are we to check potential excesses by state controlled police operatives, if and when they come into being? How do we insulate the state security apparatus from the power drunken grasps of the state governors and their political party stalwarts and godfathers?

We must also acknowledge that we do already have state controlled agencies all around the country that operate as quasi–police organisations. Lagos State has LASTMA as a veritable traffic law enforcement outfit alongside a vibrant environmental policing agency. Imo State has a state-wide vigilante service that operates like a community policing network. It also has ENTRACO, as an environmental sanitation watchdog. Examples abound all over the country of worthy efforts by state governments to contribute to the general upkeep of the law in various tangible forms. In all cases, the enabling laws allow these agencies to investigate, detain and prosecute offenders of the specific laws for which they were established.

The supposed need to have state controlled police, or the archetypal crime-fighting detective agency, emanated from the spiralling crime wave and security challenges in the country. But with state schools and colleges, universities, hospitals and other public utilities running at no greater efficiency than similar federally owned institutions, what is the certainty that state controlled police will have the intended effect of minimising crime in the states? Given the high cost of maintaining any level of security, how do we intend to fund the state police scheme? Shall we depend on already over stretched federal allocations at the expense of vital expenditures on education, health, agriculture and other sectors?

The Kwara State governor has already announced that his government cannot fund an independent police force.

What about recruitment and training? When we create state police, shall we return some calibre of federal policemen to their states of origin or do we start from scratch? Will the states run their police training academies independent of each other and with all the attendant consequences of varying operational standards and doctrines? Besides, have we maximised the use and efficiency of the available resources for containing crime in the states? It is my considered opinion that we have not.

Very amazing is the number of uniforms on parade on every road in every state and local government of the federation. From bank and hotel security units to street neighbourhood watches, village vigilante, local government, ethnic and state policing organisations, including the entire federal security apparatus, the evidence suggests very strongly that Nigeria is adequately policed. But the reality leaves much to be applauded.

So, rather than canvass for dubious control of state police, governors should work for assiduous deployment of the various private and public security agencies into a seamless, efficient nationwide effort to grapple effectively with the security challenges confronting the nation. Nigeria has enough experts in security management to figure out the operational scheme for an all-embracing, nationwide security network. What we have lacked so far, is the political will to think within the box.(Pita Okute)