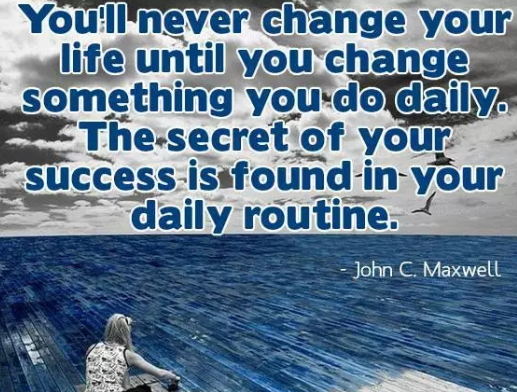 “Success isn’t owned. It’s leased, and the rent is due every day”-J. J. Watt

Paula White once said, “Your future is found in your daily routine. Successful people do daily what others do occasionally”.

Losers do occasionally what winners do daily! If you really want to know the reason why some people succeed and others don’t, you need not look far-the secret is in their daily routines!

Tony Robbins corroborated this when he said, “It’s not what we do once in a while that shapes our lives, but what we do consistently”.

The idea of a fixed future is a farce! Our future is constantly changing because of little things that happen in the present.

The #1 leadership coach, John C. Maxwell once said, “You’ll will never change your life until you change something that you do daily. The secret of your success is found in your daily routine”.

Successful people don’t have New Year resolutions; they have daily resolutions. Success is a daily job! When people wait for the New Year to make a resolution, then they have waited too long. Resolution must never be a yearly event; it must be daily. 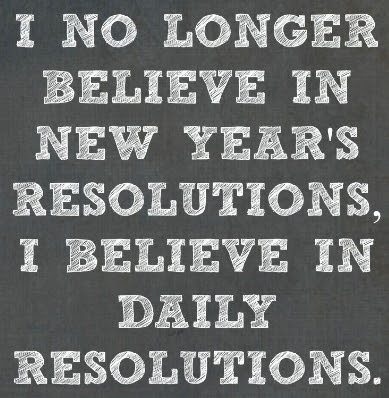 A brief look at the origin of New Year Resolution will actually give us the reason why it is bound to fail from the beginning. A New Year’s resolution is a tradition that originated about 4000 years ago from the Babylonians in which a person makes a promise on New Year’s Eve to make certain changes or self-improvements in the year ahead.

The practice was further carried over into Roman times with worshippers offering resolutions of good conduct to the two-faced deity named Janus, the Roman god of beginnings and endings, who looks backward into the old year and forward into the new.

The ancient Babylonians made promises to their gods at the start of each year, which began in mid-March but later shifted to January after the Romans tinkered with the calendar to reflect their own first month named after Janus.

Ancient New Year resolutions were only made on two premises: that they would return borrowed objects and pay their debts but the modern form has been extended to cover anything thereby diluting the sacredness of the practice.

The Babylonians and Romans had a greater motivation to stick to their promises than what we have today, because for the ancient people of Mesopotamia, keeping their promise would mean that their gods would bestow grace on them throughout the course of the following twelve months, and breaking those promises would put them out of favour.

Today, the only thing that has changed (for some) is that, rather than making promises to gods, we make promises to ourselves.  And since we cannot possibly rain thunders and lightning on ourselves as punishment for not keeping our promises, it need not surprise us that sooner or later we fail in staying true to our words.

Ancient New Year resolutions were born out of deep commitment and reference to a deity, it was more religious then but has now gradually become more of a casual practice. People now make New Year Resolution with impunity!

A 2007 study by Richard Wiseman from the University of Bristol involving 3,000 people showed that 88% of those who set New Year resolutions failed, despite the fact that 52% of the study’s participants were confident of success at the beginning.

Man is designed to live daily. We sleep daily, we eat daily, we bathe daily and that is why the only religions that have survived modernization are those with daily rituals! I have realized over the years that systems that cannot be monitored daily are bound to fail.

Aristotle, Alexander the great’s teacher and mentor once said, “We are what we repeatedly do. Excellence, then, is not an act, but a habit”.

No wonder that the younger Alexander was able to conquer the whole then world of his time by living repeatedly on his teacher and mentor’s admonition. From Ludwig van Beethoven, Leonardo Da Vinci, Albert Einstein, Charles Darwin, Benjamin Franklin, and Winston Churchill   to the new generation of Bill Gates, Jeff Bezos, and Mark Zuckerberg , one critical thing they all have in common is a formidable daily routine

There is one thing that success and failure have in common-they happen ‘intalmentally’! Whether for failure or success, they are both gradual; they rarely come by suddenly. People either fail daily or they succeed daily; they don’t fail or succeed suddenly!

Robert Collier said, “Success is the sum of small efforts, repeated day in and day out”.

As a personal development coach, the major thing that I normally do around my clients and mentees is to see how to influence and tinker with their daily routine in such a way that it will align with their ultimate destination.

My competency watch words has always been:

If you want success in the long term, you must be able to make daily adjustments on a short-term!

In the Ancient Greek mythology, the story was told of how everything is achievable through consistent daily routine. There was a boy who wished to be strong when he grew up, so strong that he would be able to lift a fully-grown bull. In order to realize his ambition, he started to train by lifting a bull calf daily from the day that it was born.

The spectators were fully amazed at his strength but not the man or the bull, to them it was a daily routine and it had become a part of them! That is the power of daily routines; it makes herculean tasks look casual.

How can we live daily and intentionally? How can we transform yearly resolutions into a more quantifiable and monitorable daily routine?

#1 MAKE DAILY GOALS: Anthony Robins said, “People are not lazy. They simply have impotent goals that do not inspire them”. There is nothing as potent as daily goals! Daily commitment to a goal is essential to its accomplishment.

The first level of commitment to a goal is to write it down. Committing your goals to paper increases the likelihood of your achieving them one thousand percent.

#2 GET DAILY FEEDBACKS: Ken Blanchard said, “Feedback is the breakfast of champions”. We’ve all heard the saying, “What gets measured gets done.” It means regular measurement and reporting keeps you focused because you use that information to make decisions to improve your results. Track your progress!

Kim Collins said, “Strive for continuous improvement, instead of perfection”.

I have observed that people that are committed to daily improvement ultimately reach their destinations, even if it is little! Small daily improvements are the key to staggering long-term results.

The Japanese economy was revolutionized through the culture of unending improvement called Kaizen. The competitive success of Japan in the world’s market place is greatly as a result of their implementation of the Kaizen concept in their corporations.

In contrast to the usual emphasis on revolutionary, innovative change on an occasional basis, the kaizen culture looks for uninterrupted, ongoing, and incremental daily change. Edmund Burke said, “Nobody made a greater mistake than he who did nothing because he could only do a little”.

#4 BE ACCOUNTABLE DAILY: Steve Covey said, “Accountability breeds responsibility”. Being accountable to somebody such as friends, family, or a trainer can be a powerful tool to ensure progress towards your goal. Confucius said, “A man who has committed a mistake and doesn’t correct it, is committing another mistake”. As a personal development coach, I have come to realize that the only way to intercept our ‘destructive’ tendencies is through accountability.

#5 REWARD YOURSELF DAILY: Gautama Buddha once said, “You yourself, as much as anybody in the entire universe, deserve your love and affection”. One of the major reasons why people get frustrated in life is because they’ve designed their lives around the kindness of others; you have to learn how to be kind to yourself. Rewarding yourself brings positive reinforcement.  You need to develop a daily reward system for your goals. For your resolutions to be resolute, you must NEVER forget to reward yourself!

#6 AUDIT YOUR RELATIONSHIPS DAILY: Never plan a future with people who don’t have future plans! I have often said that success is letting go of people, perspectives and places that hold you back in life.

Brian Tracy said, “Your choice of the people you associate with will have more of an impact on what you become than any other single factor”.

Rich people would rather be educated than entertained! Take billionaire Warren Buffett, for example, who estimates that 80% of his working day is dedicated to reading. Do not underestimate the long term impact of compounded knowledge.

If you really want to attract good things into your life, then you have to be intentional about making growth a daily ritual.

Prev1 of 2Next
Use your ← → (arrow) keys to browse
Continue Reading
You may also like...
Related Topics:john maxwell, quotes, success

It Is Only A Great Fool That Will Not Be Grateful!
Stop Complaining About Your Country; Create Your Desired Environment