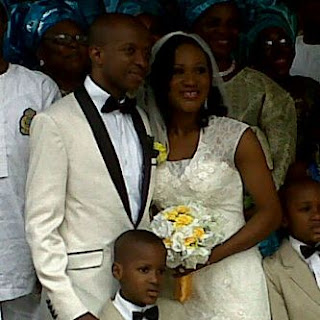 Mrs Adesunmbo Ajaba one of the baby-mamas of African Queen crooner, 2face Idibia has married her pastor.

After two wedding cancellations due to controversy their relationship is generating among church members, they have finally tied the knot.

The wedding we learnt took place at the Sheraton Hotel in Ikeja Lagos around 10 am this morning.

For those who do not know her, Sumbo Ajaba now Sumbo Adeoye is the mother of Tuface Idibia‘s two boys, Zion and Nino.

2face and Sumbo back in the days

She is a very successful woman and the owner of ESOB events planning and management company based in Lagos.

Pastor David Adeoye on the other hand is the senior Pastor of Royalty Christian center based in Agege. He lost his wife, Pastor Mrs Folake Adeoye in November 2011 after a brief illness. Pastor David married Folake in 1998.

The beautiful bride immediately took to her Twitter page to express her gratitude to God.

“Lord, I Give you Praise. You who know my beginning and Ordained my ways, to Him who created a Plan” – said Sunmbo in a tweet