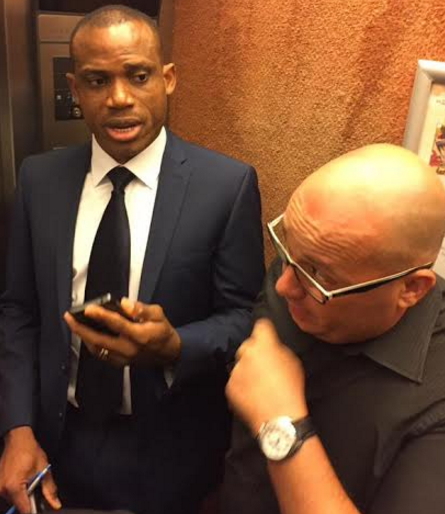 As we all know that Super Eagles Coach, Sunday Oliseh has tendered his resignation letter after NFF ordered him to report to Amodu, a move he perceived as a breach of contract.

Immediately the news of the resignation went viral on the social media, many fans took to Twitter to express their anger over Oliseh’s action which they described as ‘unpatriotic.’

Chimaobi Victor (@chimas2010) wrote that its “Too bad the way Sunday Oliseh dumped the Super Eagles in the middle of d road. But we must move on with our life.” while Daddy Lucious,

@dapoolutope, said that “@SundayOOliseh Dude didn’t sleep so he can resign like a thief in the middle of the night. COWARD.”

To ‏@Omojuwa, it was madness gone too far, he said: “And now, I just saw that the latest Super Eagles coach, Sunday Oliseh has resigned. The beat of madness in our football is persistent.”

Gloria Adagbon ‏@gloria_adagbon said that “When will NFA put their house in order? National football development can’t happen with all these issues!”

Hannah Imaga said ‏@HannahImaga that this was a drama which just started, “drama has ended or is it just starting? time will tell.”

Emmanuel Etim ‏@Emiearth went biblical to describe the action of Oliseh. Etim believes Oliseh has seen the handwritting that he won’t be able to scale the hurdle of Egypt in the two legged AFCON qualifiers coming in March, hence the need to quickly throw in the towel.

Etim tweeted: “Oliseh saw the handwriting on the wall. It was clearer than ‘Mene Mene Teken Parsin’. The Egypt fixture was a mountain tooooo high.” To @koulibalee, “Resignation of Sunday Oliseh just proved he’s not man enough and not ready for greatness as we all presumed.”

Godspeed using ‏@JesuisNaija said that “@SundayOOliseh Reminds me of how Saul became king without begging for it. Arrogance and loose temperament made it end abruptly…byeee ????”

To Oluwalana Ayodeji, Oliseh’s action as left the nation in a tight corner ahead of the fast approaching AFCON qualifiers. He tweeted ‏@ayodeji22ng that “Your resignation has left the Nation in a precarious state when we should be busy preparing for Afcon qualifiers.”

Silva said Oliseh is scared of Egypt for him to resign now. “@SundayOOliseh dats unfair. Are you scared that you can’t beat Egypt, where is your much vaunted patriotism.”

Adamu Olamide Ahmed ‏@AdamuOlamide concluded that “@sundayooliseh this is unpatrotic and unprofessional. you ought to finish the journey which you started and not turning back midway.”

Charles Osei Asibey ‏said: “@SundayOOliseh the principled are often not given the chance to deliver. Massa, you pay your dues.

Oladimeji Olanrewaju ‏said that “we don’t respect contracts in this country, respect ur decision all the way.Thanks for your contribution to Nigerian Football.”