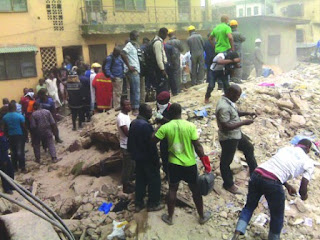 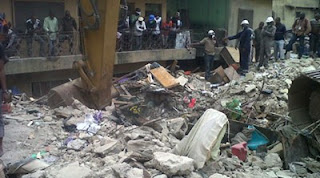 A survivor of a 3-storey building that collapsed in Ebute Metta part of Lagos last year has narrated his ordeal on that fateful day.

Hear Olayinka in his own words below:

My name is Olayinka Sulaimon Mogaji and i am one of the survivors on that sad day. I was in the building with my mum,sister and my best friend who came to observe the Ramadan period with us as his normal routine.

It was about 2:00am,i was in my room sleeping,it was like a dream,i was hearing voices in my sleep so i woke up,i took a walk to the passage to clear my eyes from the sleep,it wasn’t up to 2 seconds i entered the passage then the building started sinking. It was so scary! I thought i was dying bit by bit,all i could do in that short period of time was to say my last prayer.

When the building had reached it last floor it stopped then i realized i was still alive,i heard my mum’s,sister’s and friends’ voices screaming for help,I have never been to hell before but that moment felt like what we read and hear,yes it was just like they make hell look like,i was so scared but hearing the voice of my loved ones gave me courage and strength,i dragged myself out of the debris then made it to the roof since we lived on the topmost floor.

On getting there i was confused,i didn’t know who to rescue first,my mum,sister or best friend,they were all trapped but i figured i should rescue the oldest first so i went for my mum,by the time i took off the bricks pinning her down to her bed i was helpless,so tired! Then i realized i was really bleeding from the head.

We all made it out of the building then police took us to one of the hospitals around. Every time i think about the people that died,that i will never see them again,i feel so sad and still wonder why God decided to spare me and my entire family.

Whatever u do in life,always put God first! I’m a sinner yet he spared me and my family.

RIP to those that didn’t make it,U will always be remembered because everyone lived like one big family in the building and thank u all for your concerns.