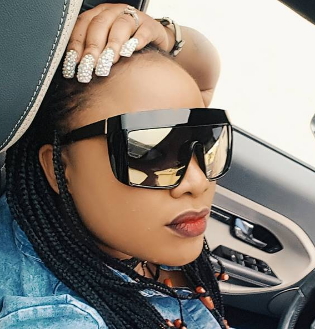 September 1st, 2017 – Sotayo: I Featured Bobrisky In My Nollywood Movie Because He Is My Friend I Can’t Deny Him

Nollywood actress Tayo Sobola has explained herself to Nigerians abusing her for featuring notorious gay prostitute Idris Okunneye Bobrisky in her movie.

The actress who found herself in deep mess for wishing Idris Okunneye a happy birthday urged Nigerians to stop judging others.

Few minutes after posting the above birthday shout out, Sotayo came under heavy fire as fans condemned her for promoting immorality by keeping in touch with the gay prostitute.

Here are some of the comments;

Another fan of the actress @its.king.jimmy said;

Here is her explanation to fans:

Bobrisky got his first acting role in Sotayo’s upcoming movie.

Idris was based in Lagos before he relocated to Abuja to be plying his trade when his mother disowned him.