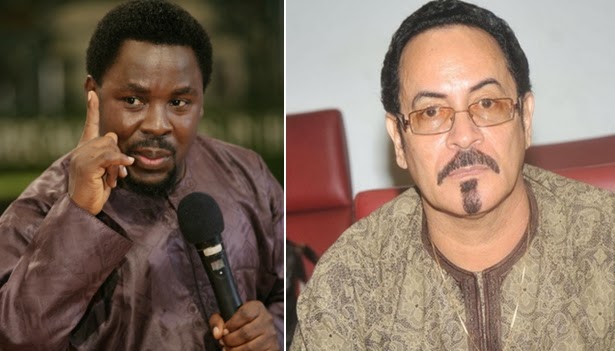 Ex-President of The Performing Musicians Association of Nigeria, PMAN, Mr Tee Mac is out with a new story aimed at promoting controversial prophet TB Joshua.

In a recent interview, Tee Mac who praised the god of Prophet TB Joshua claims his whole house would have been destroyed if not for the presence of TB Joshua’s sticker that quenched the fire (LMAO).

The popular flutist said the other rooms in his Lagos mansion got burnt except for the room with TB Joshua’s sticker on the door.

Hear Tee Mac in his own words:

“I was in Abuja when the fire occurred, the fire burnt other rooms but stopped at the front of my bedroom suite where TB Joshua’s sticker was. TB Joshua saved my house from burning further”

Contrary to Tee Mac’s claim, sources from Lagos claim the fire was put out by the timely intervention of firemen on October 30th, 2013 around 1am. The fire was caused by power fluctuation in one of his air conditioners.