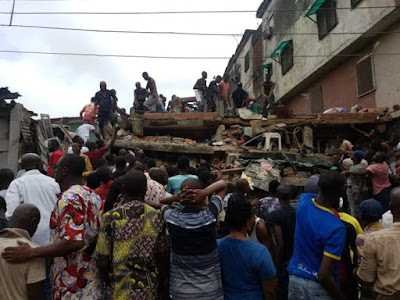 2 dead bodies were evacuated after several hours of rescue operation from a building that collapsed near Campos bus stop on Lagos Island yesterday around 2.p.m.

Several people were injured as rescuers managed to rescue 14 people despite threat from the mammoth crowd that surrounded the area.

According to residents, a telecommunication mast installed on the building two weeks ago brought down the building.

As at 6:30pm yesterday, we learnt that 5 people were still trapped under the rubble.

Emergency workers had difficulty in rescuing the trapped victims because of the structure’s closeness to other buildings and threat from the crowd chasing rescuers from the site.

As at the time of this report, LASEMA excavator has pulled down a structure besides the collapsed building. Electric poles around the structures were also pulled down.