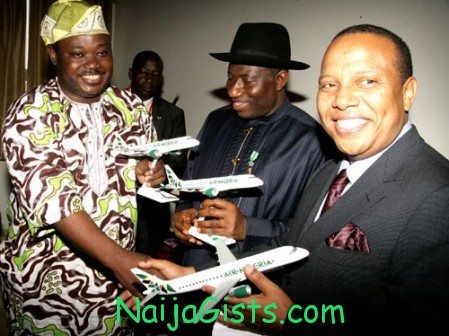 Almost half the aircraft had been pulled out of service at Air Nigeria, the country’s second-largest airline, and its staff hadn’t received a paycheck in four months when its top executive summarily fired nearly all of its employees for “dishonesty.”

“Corporations are like individuals, who naturally will get sick,” Air Nigeria chairman Jimoh Ibrahim was quoted as saying. “The usual thing to do is to admit them in hospitals, either for corporate surgery or for treatment, as the case may be.”

The collapse and the mass firing of about 800 workers at Air Nigeria comes as only four domestic airlines are currently flying in Nigeria, down from nine flying at the start of this year. The dramatic decrease highlights the current turmoil of the nation’s troubled aviation sector.

While the federal government insists it conducts strict maintenance and financial audits of airlines, the financial mess left behind after Air Nigeria’s shutdown and a June crash by another carrier that killed more than 160 people has left many Nigerians leery of flying and distrustful of official safety promises.

“I think that if in the future, if anybody’s coming into this business, I think the government needs to put in a particular panel to check that person’s mental state, first of all, and the financial records need to be checked so we can know if this person can even do the job,” said Isaac Balami, president of Nigeria’s National Association of Aircrafts Pilots and Engineers. “We’ve seen people that can’t even manage an ordinary business. … Aviation is not for a lazy man or somebody who doesn’t know what he’s doing.”

Angered by their firing, more than 60 former Air Nigeria employees protested Friday outside of the Nigerian Civil Aviation Authority and later marched past a domestic wing of Lagos’ Murtala Muhammed International Airport. Former employees described a dysfunctional environment where bosses removed telephone lines and called Internet access and using an elevator to reach their high-rise office “a luxury.”

Staff last received a paycheck in April and had been sitting at home for weeks for a call to return to work. At one point, employees also were forced to sign “loyalty oaths” to swear their allegiance to the company and promise not to be union members, workers said. Yet the company continued to collapse, even after it received money from a federal bailout fund, employees said.

“If they want to steal Nigerian money, don’t use our hands or our heads to steal it,” said an employee who asked only to be identified by her first name Barbara, out of hopes she might still receive the rest of her salary. “Just steal it and deal with your conscience.”

Financial troubles have trailed Air Nigeria, a one-time darling of the country when billionaire Richard Branson helped create it as Virgin Nigeria in 2005. Branson pulled out of the airline and in 2010 Ibrahim took it over and renamed it.

Ibrahim, who also directs a major hotel chain, an insurance firm and an oil company, has strong ties to the country’s political elite, as do many in business in the nation. But the engineers’ strike earlier this year saw workers claim the company’s finances stopped it from properly servicing its fleet. A top former company official also referred to airline’s aircraft as “flying coffins” in local media reports.

The workers presented a letter outlining their complaints to officials at the civil aviation authority. Samuel Ogbogoro, a spokesman for Air Nigeria, did not respond to a request for comment Friday over the employees’ allegations. The company has said, however, it hopes to reopen in 12 months, though it remains unclear how it will do that with the debts employees say it faces.

Experts believe Air Nigeria is not a unique case among airlines in Nigeria, however. Jet fuel purchases often must be made with cash in the country. Other executives with ties to government officials have floated airlines in the past.

Meanwhile, the country has suffered a series of fatal plane crashes over the last decades, with authorities never offering clear explanations for why the disasters happened.

In June, a Dana Air MD-83 crashed about five miles north of Lagos’ airport, killing 153 onboard and 10 people on the ground. While an initial report suggests both engines failed on the flight, officials haven’t explained why that happened, though they cleared the airline to fly again this week.

Meanwhile, other airlines appear to be grounded over financial concerns and other matters, leaving only four carriers flying and unable to meet the nation’s growing demand for flights. That could put further pressure on an industry where corners have been cut in the past and pilots feel pressure to fly no matter what.

“The aviation industry is all about efficiencies, speed and accuracy,” Balami said. “Can you imagine a pilot … going through financial difficulties (and) he or she can’t pay their bills and you expect them to concentrate?”