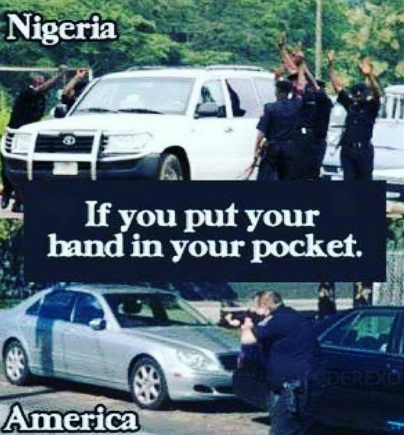 This is not my first time of travelling to the United States, but it was the first time I was taking my time to observe and draw a comparison between the American and Nigerian way of life.

Coming for my IVF appointment that may see me spending more than a month here, I thought, ‘what better way to while away time in between appointments than to gallivant from state to state with Sandra, my lost but found friend, and in the process, get to understand American culture better. I had been in my posh apartment since I arrived two days ago.

But Doctor Scotch has the final say though; while I wait for his soon to be issued restrictions, I’ve got to enjoy America while my freedom lasts. Freedom at last! After all, the US is a country of freedom, a place where everyone and everything, including cats and dogs have freedom. Anyway, who doesn’t know that, when it is conspicuously stipulated in their constitution, and the likes of Martin Luther King Jr, fought and died for it?

I wasn’t alone in that line of thought though. Nnamdi, my former colleague in the office, once told a story of a lawmaker from one of the developing Asian countries who lodged in the same hotel as he did a couple of years ago. “The man was in the United States for a leadership programme and on his way down from the tenth floor where his room was, he met a young lady in the lift and not only made amorous advances at her, he practically groped her.

On getting down, the distraught lady went straight to the front desk and lodged a complaint. Looking visibly surprised, the man did not deny the allegation. On the contrary he queried, ‘I thought America was a free country where I could do whatever I liked?’ What happened to him afterward is a story for another day,” Nnamdi told his small audience, provoking an uncontrollable laughter.

Anyways, I found yesterday that no matter the freedom the citizens enjoyed, they also know that it comes with a good dose of responsibility. While coming back in the evening from a shopping spree in a nearby discount shop Sandra and I discovered, we met some guys who were either drunk or high on drugs on a not so illumined street.

I was afraid because if you meet such unkempt and rugged looking guys miming some reggae tunes and skanking on the street at Ojuelegba, you may be in for some harassment, no matter the time of the day. But Sandra on hearing my concerns blurted out in a mixture of Pidgin and Nigerian English “Dem no fit do anything! Dem go see wetin pass death.

Here, you have a right to drink o, but in your drunkenness and homelessness, you dare not exceed your boundary. If you try anyhow you go see anyhow, na so e be for here o,” she concluded with a loud laughter. “Warri babe! Old habits never change! I thought you have forgotten all that pidgin and should have been speaking through your nose by now,” I joked.

That was how we passed the guys and they were neither unruly nor violent to us, except for one that begged us for a dollar to buy food. At first it was all funny to me and I kept telling Sandra, who out of frustration in Nigeria, left to settle in the US ten years ago, that ‘We shall get there.’ But at the hospital the next day, I almost wept for my dear country and queried no one in particular ‘When shall we get to this level?