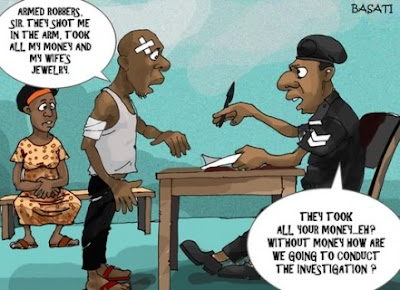 Nov 18, 2012 – The Effects Of Corruption In Nigeria Are Unquantifiable,  Only Death Penalty Can End It – HR Activist

As corruption in Nigeria continues to develop wings and feathers, many Nigerians have opted for death penalty as punishment for anybody found guilty.

Joining other Nigerians currently calling for the heads of corrupt individuals, ace lawyer and activist, Fred Agbaje has said that the recent call by the Arewa Consultative Forum is the way forward.

Agbaje said, “If we feel that the death penalty will put an end to or reduce corruption in our society, so be it.”

The Lagos-based legal practitioner is of the opinion that the world is gradually moving away from capital punishment, rather opting for life imprisonment. He stressed that the situation in those countries is different from Nigeria’s.

He said, “In Nigeria, corruption has become the 37th state of the federation, growing in leaps and bounds and drawing its weekly and monthly allowances from the Federation Account. If the death penalty will address it, it’s okay because we have not reached the level the advanced countries have reached where they convert the death penalty
to life imprisonment.

“I will suggest that there must be a fundamental surgical amendment to the act establishing the two anti-graft agencies. And it must include the removal of the power of the President to appoint the headship of the organisations. So long as the President retains the power to appoint the headship, the fight against corruption is a joke because
you cannot fight yourself.”

In the same vein, the Chairman of the Movement Against Corruption and Chief Missioner of Ansar Ud Deen, Imam Abdur-Rahman, described the call as “a desperate situation demanding a desperate solution.”

The Muslim cleric said the call for capital punishment is understandable, knowing the background of those submitting the proposal.

He said, “If you look at the monumental havoc that corruption has wrecked and is still wrecking on the people, then the call for death penalty could be understandable. Whether it this is something that could be implemented is a different argument.

“Corruption kills people; corruption shortens life expectancy. The implication of corruption on our national and individual lives is unquantifiable. The call could be understood and desperate situations sometimes call for desperate answers.” (Source:DailyPost)