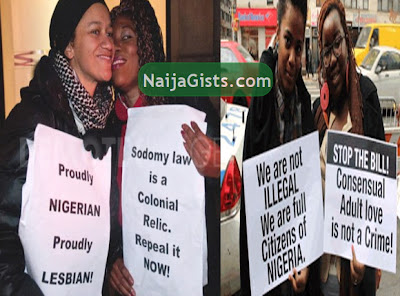 A gay support group in the United States, All Out, has started a global campaign to collect 100,000 signatures of sympathisers to mount pressure on Nigeria’s President Goodluck Jonathan not to sign the impending law against homosexuals.

As at Saturday evening, the group has collected close to 70,000 signatures. But how these efforts will persuade President Jonathan not to sign the bill into law, remains to be seen.

The group claims to be working with partner organisations in Nigeria, such as Changing Attitude Nigeria, Improve Your Health Initiative, Initiative for Advancement of Humanity, International Centre for Advocacy on Right to Health, Sexual Minorities Against AIDS in Nigeria, the Initiative for Equal Rights, Nigerian LGBTI’s in the Diaspora against Anti-Same Sex Laws.

The anti-gay bill, was first passed by the Senate on 29 November 2011.

The bill criminalises gay marriage and any same-sex “amorous relationship”, a major step in putting in place a law that has drawn widespread criticism in Western countries.

The Senate increased the punishment for gay marriage from the five years’ imprisonment originally proposed in the draft bill, to 14 years. The legislation must be passed by the House of Representatives and signed by President Goodluck Jonathan before it becomes law.

“Persons who entered into a same-sex marriage contract, or civil union commit an offence and are each liable on conviction to a term of 14 years in prison,” the bill says.

“Any person who registers, operates or participates in gay clubs, societies and organisations or directly or indirectly makes public show of same-sex amorous relationship in Nigeria commits an offence and shall each be liable on conviction to a term of 10 years in prison.”

The bill passed through the second reading at the House of Representatives last week, unanimously, drawing worldwide outrage by gay sympathisers.

A top US human rights official said he has not discussed with Nigerian politicians an anti-gay bill poised to pass Parliament.

Michael H. Posner, the Assistant of State for Democracy, Human Rights and Labour, declined to comment directly on the pending legislation during a press conference at the US consulate in Lagos.

But, he says human rights issues must be addressed within societies and “it is very difficult, if not impossible, for (foreign) governments to force that change”. Source

7 Nigerians Face Amputation For Robbery In The United Arab Emirates
The Effects Of Corruption In Nigeria Are Unquantifiable, Only Death Penalty Can End It – HR Activist